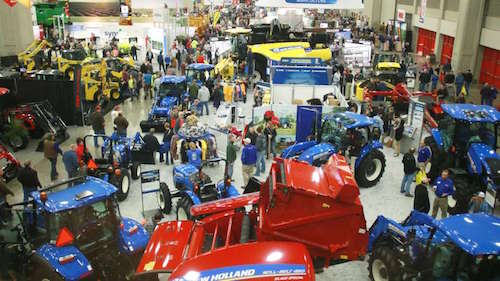 Date: 02-12-2017 —The 52nd annual National Farm Ma­chinery Show is expected to draw more than 300,000 agriculture-minded visitors from across America to the Kentucky Exposition Center for four days next week.

The event, Feb. 15-18, is billed as the country’s largest indoor farm show.

It also is one of the most lucrative trade shows staged annually in Louis­ville. It likely will generate at least $17 million in spending to shore up the area’s economy, the Louisville Convention & Visitors Bureau has estimated.

The farm show is locally produced by the Kentucky State Fair Board. It is open to the public and has no admission, but there is an $8 per vehicle fairgrounds parking fee. Hours are 9 a.m. to 6 p.m.

You might want to get our your ear­plugs for the show within the show — the revving and roaring 49th annual Cham­pionship Tractor Pull. The monster ma­chines will take center stage at Freedom Hall, with competitions each of the four days and ticket prices from $20 to $45.

The late Kentucky Gov. Edward T. Breathitt opened the first farm show at the expo center in 1966. The 2017 farm equipment expo will spread out over 1.2 million square feet at the fairgrounds, filling nearly every square inch of avail­able exhibit space in eight interconnect­ed halls.

Melissa Lord, a marketing services official with Syngenta, a large seed and fertilizer company that is sponsoring the tractor pull, said the annual agriculture event has ‘an environment where we can connect with our customers and show our appreciation for them. We’re able to share the latest from Syngenta with those who know us and with others who might be meeting us for the first time.’

The farm show will have more than 850 exhibitors who will showcase nearly every line of farming equipment. The show seeks to educate farmers and agri­business representatives and focuses on ‘innovative technology, new product launches, and alternative energy,’ the fair board said in a news release.

A gift and craft market in the South Wing will have more than 70 booths of­fering jewelry, clothing, cowboy gear, tractor-branded merchandise, hand­crafted gifts, toys, collectibles, snacks, and many other items. The market is open daily, also from 9 a.m. to 6 p.m.

The tractor pull is a major draw in its own right — featuring screaming mon­ster engines, the smell of burning rub­ber, and pounding vibrations, the fair board officials said. Some tractors are powered by modified aircraft engines.

Top drivers vie for the grand champi­onship and a cut of the more than $200,000 in prize money. Drivers will compete in 10 divisions, based on the weight of their machine. Entrants will in­clude Rowan Zeinstra of the Netherlands — and his 8,000-pound tractor — and what is expected to be a record number of women participants.

Tickets and schedule information for the Championship Tractor Pull are avail­able at the Kentucky Exposition Center Ticket Office, or online at www.ticketmaster.com or by phone at 1-800-745-3000. A detailed tractor pull schedule is at www.champpull.org.