LOUISA, Ky. — (DATE: 2/11/17) –As first reported several weeks ago the Rogersville Shale operations in gas and oil rich Lawrence County are a hot item on the market these days. In fact Lawrence may in the center of the richest find in recent history.

So look out it you are an oil and/or gas owner, property owner or heir, the rush to buy you out is fierce.

The Lazer ran two stories concerning the operation near Cherryville in Lawrence County.

A representative from oil and gas owners syndicate NARO, Dick Wilson explained the situation in a letter.

“…There have been several wells already drilled in Lawrence Ct . and one in Johnson Ct. at an estimated cost in the range of $50 million. A Rogersville well in your area would cost more than $10 million to drill.” 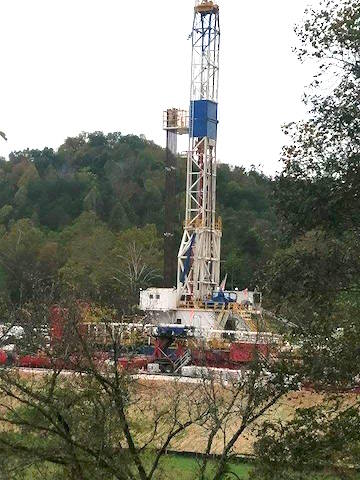 Here is a public announcement from:

Re: The Rogersville Shale and your land rights

As many of you are already aware, our area of the country lies above a formation known as the Rogersville Shale.  The Rogersville Shale lies in a deep, narrow section of the Appalachian Basin running beneath eastern Kentucky called the Roman Trough.  Empirical data indicate the potential for vast reserves that could be comparable to the Marcellus Shale, and for years there has been significant commercial interest in extracting deepwell oil and gas from this region.

In the past, the economic viability of developing these resources has been hampered both by the depth of the reserves, and by the regulatory environment.  Fortunately, recent political changes and the development of unconventional drilling techniques suggest that the potential of these reserves may finally be realized.  Land records from Lawrence County and the surrounding counties reveal a strong interest in acquiring subsurface rights in this area.  The oil & gas industry thinks the Rogersville Shale could be very profitable.

Be aware that you may be approached about selling or leasing your subsurface rights.  You might be contacted by an established gas & oil company, or by a land agent representing a previously unknown development company with no track record or history.   They will present you with an offer in the form of a long agreement comprising several pages of fine print.  These agreements are drafted by the purchasers to include terms and conditions favorable to them, and the ramifications of agreeing might not become clear to you, the landowner, until it is too late.  Once you accept, you are bound by the terms of that agreement.

I would advise anyone, before accepting any offer, to have that offer reviewed by an attorney experienced in this field.  An attorney can advise you about the extent and nature of your subsurface rights, the legal and tax implications of the agreement, the effect of the agreement on your surface rights, and any unfavorable terms such as arbitration or out-of-state venue selection clauses.  An experienced attorney can also ensure that any offer you do accept is fair, and negotiate on your behalf if necessary.

Growing up in Louisa - VALENTINE!