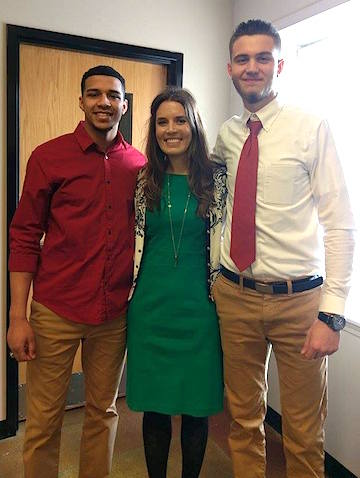 LOUISA, Ky. — Rotary held their weekly meeting on Thursday, February 9th at the First Baptist Church in Louisa. After the opening prayer, Pledge of Allegiance and Four Way Test the meeting began. Two visitors were announced as Tonya Maynard and Coach Travis York.

There was one announcement, Sherry Compton had helped decorate for “A Night To Shine” a night to cater to those with special needs that is sponsored by Tim Tebow and locally by Mitch Castle.

She announced that ‘Miss Teen Kentucky’ will be there as a buddy for that amazing night.

The guest speakers for Thursday’s Louisa Rotary luncheon  were announced as Timmy Dalton and Cameron Maynard. Both boys play basketball for the Lawrence County Bulldogs.

The young men each took a few minutes to introduce themselves and tell a little about someone they both agreed have had a big impact on their lives, Miss Case (aka) President of Rotary Lindsey Case. They had many kind words about her, not just teaching accounting but teaching them life lessons and helping guide many of their decisions for life beyond Lawrence County High.

Cameron Maynard spoke first, he announced his parents as Dwayne and Tonya Maynard. He spoke of his love for motocross and basketball. He talked in depth about competing for a scholarship with a business project. He stated that his love for business stemmed from his class with Miss (Lyndsey) Case. He stated that he intended to attend The University of Kentucky after graduation.

Timmy Dalton spoke after Cameron and also spoke on how he too had been shaped by Miss Case. He stated that, he hadn’t yet decided what college he planned to attend, and that he tried not to look too far into the future as he was focusing on this season at the present time.

Dalton, the nation’s leading high school scorer said his plans were to go to college and major in business. Timmy is also in the running for Mr. Kentucky basketball. The link will be provided for your vote.

Neither young man spoke of their amazing accomplishments as a team. Timmy Dalton didn’t talk about being the leading scorer in the nation, and when questioned why, they both had the same answer, “Miss Case taught us that we are to be humble in our accomplishments.”

They were then asked a question about how it felt to play at Rupp Arena? They both agreed that it had been a surreal experience, and Cameron laughed when saying his first shot had been an air ball. At this time the weekly meeting was adjourned.

Every Thought Captive -- Your ‘Self’ Doesn’t Belong to Yourself