“We want to bring Kentuckians together by focusing on legislation that will improve the lives of middle class and working families throughout the Commonwealth, from our rural areas to our urban centers,” said House Democratic Leader Rocky Adkins. “My colleagues and I have put together a legislative agenda that we believe will not only improve the lives of our constituents, but bring Democrats and Republicans together to solve some of our state’s toughest issues.” 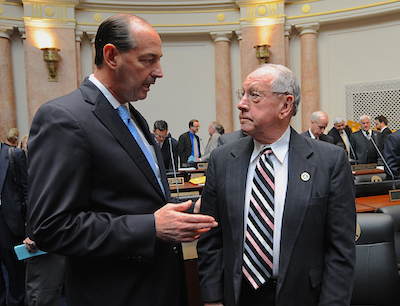 The House Democratic initiatives center on the health, wealth, and safety of Kentuckians through the sponsoring of more than a dozen bills and resolutions, including a rural jobs initiative to increase capital access for businesses and entrepreneurs; a brownfields redevelopment tax credit to create urban jobs; a legislative directive to maintain operations at Education and Workforce Cabinet Career Centers recently closed by the Bevin administration; a restoration of budget funding for colon, cervical and breast cancer screening; a reauthorization of last year’s effort to expand eligibility for preschool children, and a resolution urging Congress to pass Congressman Hal Rogers’ bill to return abandoned mine lands money to coal counties, among others.

Details of the “United Kentucky” agenda include:

House Bill 182, sponsored by Rep. Chris Harris of Forest Hills, would establish a tax credit to promote investments for businesses in rural communities still struggling with the downtown in the coal economy and the lingering aftereffects of the economic recession.

“Too many of our community banks have been forced to close because of a one-size-fits-all regulatory system that has placed tremendous stress on smaller lending institutions,” Rep. Harris said. “Our goal is to take action at the state level to increase access to capital in rural areas so our entrepreneurs can have access to the resources necessary for economic revitalization in these communities.”

In that same vein, Rep. Dennis Keene of Wilder is developing a House Bill that will create tax credits for brownfields redevelopment in an effort to create jobs in urban areas.

House Bill 176, sponsored by Rep. Kevin Sinnette of Ashland, mandates that employment offices recently shuttered by the Bevin administration remain open to maintain the current level of services. “Now is not the time to force dislocated employees to drive an extra 50 miles or more to access services at one of these career centers,” Rep. Sinnette said. “These centers provide a direct service to people in need in these local communities, and I see no justification for creating supposed ‘efficiencies’ on the backs of working people.”

House Concurrent Resolution 50, sponsored by Rep. Angie Hatton of Whitesburg, urged Congress to pass the RECLAIM Act. “The Abandoned Mine Land fees that would be released upon passage of RECLAIM would provide a vital, much-needed resource to help revitalize the economy in the coal fields,” said Rep. Hatton. “I look forward to joining with my colleagues from both parties to support this bipartisan effort in Congress.”

House Bill 250, sponsored by Rep. Kelly Flood, D-Lexington and Rep. Sannie Overly of Paris, seeks to restore budget funding for screens for colon, cervical and breast cancer screening, as well as increase eligibility for the state’s pre-school pilot program from 160 percent of the federal poverty line to 200 percent. Efforts to expand screenings and pre-school eligibility were also approved overwhelmingly by both legislative chambers in 2016, but vetoed by Gov. Bevin.

“The need for increased screening still exists, and we all recognize that healthy families and healthy workers are imperative to Kentucky’s quality of life and long-term economic success,” Rep. Flood said. “I also believe – as did the majority of my colleagues on both sides of the aisle – that there are many working families and middle class homes that deserve to have their hard work rewarded through increased access to quality preschool in our public schools.”

House Bill 264, sponsored by Rep. Rick Rand, D-Bedford, relates to the “Work Ready” scholarship program which was passed by both the House and the Senate in 2016, but was later vetoed by Gov. Bevin. The “Work Ready” program was eventually established by the governor’s executive order and currently provides free tuition for eligible students to attend a state community and technical college for two years, along with Kentucky’s four year public and private institutions that offer associate degrees. House Bill 264 seeks to codify the program into state law. Rep. Rand said his bill would also expand the number of students eligible for the program to its original intent after the governor’s executive order restricted the program to a certain number of fields.

“Our Work Ready program now puts a two-year college degree within reach of every graduating high school student, while also ensuring Kentucky’s industries have the skilled workers they need to thrive,” Rep. Rand said. “Because of the program’s success and its importance to our state’s long-term goals, Work Ready should be placed in the state statute to ensure it continues well past the present administration.”

House Concurrent Resolution 49, sponsored by Rep. James Kay of Versailles, reaffirms the Kentucky General Assembly’s commitment to maintaining pension benefits for state and local government retirees, employees and teachers. “My resolution underscores the General Assembly’s commitment to our 540,000 public servants and teachers who rely on the pension benefits they have earned and have been promised,” Rep. Kay said.

House Bill 113, sponsored by Rep. Jody Richards of Bowling Green, relates to occupational licenses for military veterans and would allow experience and training gained in military service to help qualify honorably discharged veterans for state-issued occupational licenses. “I think we have improved the bill and I expect broad bipartisan support,” Rep. Richards said.

House Bill 62, sponsored by Rep. Dean Schamore of Hardinsburg, relates to the use of KEES funds for apprenticeship programs. “This legislation will give people access to their KEES funding in fields that are in high demand. This money was earned by them to prepare themselves for a skill and future employment. From a practical standpoint there is no reason a good student shouldn’t be able to use earned KEES money to start a career in a building trade or technical education,” said Rep. Schamore.

House Bill 52, sponsored by Rep. Russ Meyer of Nicholasville, relates to fentanyl trafficking. “The drug epidemic is a multi-faceted problem that demands similarly broad-based solutions. This bill is meant to target one particular component of the problem, and I have received a lot of positive input from several sources, including local law enforcement and the state Attorney General’s office,” said Rep. Meyer.

House Bill 197, sponsored by Rep. Overly, relates to academic credit in postsecondary institutions for military experience. This legislation would require the Council on Postsecondary Education to develop a uniform standard for the award of academic credit earned by virtue of military service.

House Bill 196, also sponsored by Rep. Overly, relating to misclassification of employees. “Misclassification of employees as independent contractors, especially in the construction industry, is a growing problem nationwide,” said Rep. Overly. “This results in negative effects on misclassified employees, construction employers who abide by the laws, and government agencies from the loss of workers’ compensation premiums, unemployment insurance contributions, and general tax revenue.”

In addition, House Bill 179, sponsored by Rep. Overly, relates to pay equity and non-discrimination as to gender, race, and national origin among employees performing equivalent jobs, a bill passed out of the House on several occasions in the past. Rep. Overly also has sponsored a minimum wage increase bill, House Bill 178. “No discussion of pay equity, or wage growth, or creation of a broad middle class is complete without some discussion of the minimum wage. The Democratic Caucus realizes that support inside the General Assembly for this idea has room to grow. We want the opportunity to educate our colleagues about how broadly the wage increase would affect adult Kentuckians in the workforce. Raising it would help immensely.”

Finally, Rep. Darryl Owens is working on legislation to broaden felony expungement. The bill would make pre-1975 convictions for low-level felonies eligible for expungement. These were not previously included because they are not in the current criminal code. It would also make expungement more attainable by lowering the fee from $500 to $200. “Making it possible for more low-level former felons to clear their record gives them a chance to remove one more hurdle when looking for a job and help them feel less ostracized from their communities,” Rep. Owens said.

“This is an ambitious agenda based on a simple premise – that Kentuckians deserve our best, bipartisan efforts to create jobs that result in increased wages, to promote efforts that strengthen our public schools, and to advance efforts that improve the overall health of our middle class and working families throughout the Commonwealth,” Leader Adkins said.