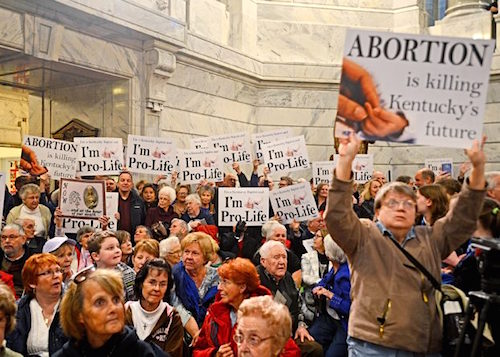 Bevin told attendees at a Right to Life Rally in the Capitol Rotunda that controversy is sometimes needed to do the right thing and compared his and Republican lawmakers’ support of pro-life legislation to the United States’ tradition of standing up for inalienable rights,

“What seems controversial to some seems like a slam dunk, no-brainer, ‘why are we even arguing about this,’” Bevin said. “This legislation was passed by Republicans and Democrats. The sanctity of human life, respect for human life, protection of the innocent … that is not something that is ‘this party’ or ‘party that.’ If in fact we believe preserving an innocent life is worth fighting for, then the journey, indeed, has only just begun.”

In the first week of the legislative session, which has historically been used for organizational purposes, Republicans in the House and Senate passed a flurry of bills, including banning abortions after 20 weeks of pregnancy and requiring an ultrasound before women can undergo an abortion.

Right-to-life supporters spoke at the rally, criticizing Planned Parenthood and abortion, saying that with a Republican in the White House and appointing Supreme Court justices, Roe vs. Wade may yet be overturned. The landmark Supreme Court decision protected a woman’s right to an abortion under the 14th Amendment.

Now, unlike in the past, Bevin said, Kentucky is in a position to lead the nation.

“Kentucky like no time … have we seen Kentucky in a position to lead this nation with economic decisions, with health issues, but very critically to those in this room and not in this room, a moral and spiritual perspective that is desperately needed,” Bevin said. “Fight this scourge that is the taking of an innocent life. It’s worth it. America’s worth it, and Kentucky is going to lead the way.”