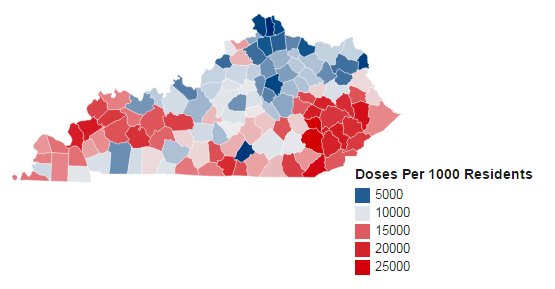 Pharmacies dispensing opioids are thriving in an impoverished Eastern Kentucky coal-depressed county, Phil Galewitz reports for Kaiser Health News. In Clay County, Kentucky (Wikipedia map) the unemployment rate is 8.4 percent, well above state and national averages, and 47 percent of residents live below the poverty line. Despite the downturn in the economy in the region, in Manchester, the county’s largest city with 1,500 residents, there are 11 pharmacies, mostly independently owned, with four opening in just the past three years.

“Drug manufacturers and distributors have pumped prescription opioid painkillers into rural America, in response to demand—much of it from adults who had become physically addicted,” Galewitz writes. “The expansion of Medicaid through the Affordable Care Act increased the percentage of Clay County residents with Medicaid and gave more of them access to free prescription drugs, including pain pills. Though Clay County’s opioid problem long preceded the act, the improved legal access helped bring a long standing problem out from the shadows. Statistics show residents are swallowing the preferred prescription opioid more.”

In Clay County, which consists of 21,364 residents, “2.2 million doses of hydrocodone and about 617,000 doses of oxycodone” were dispensed during a 12 month period ending in September 2016, Galewitz writes. That’s 150 doses for every resident. Even before ACA, prescription drugs were a problem. From 2009 to 2013, Clay County had the state’s third highest rate of hospitalizations for pharmaceutical opioid overdoses.

In Manchester, known for years as one of the nation’s unhealthiest places to live, “four in 10 residents rate their health status as being fair or poor, twice the share for the entire state population,” Galewitz writes. “Close to half the county is obese. The rate of diabetes is also higher than average.”

Manchester’s closest inpatient drug treatment facility carries a waiting list of 100 people that’s grown more than 50 percent in recent years, said Tim Cesario, director of substance abuse services at the Cumberland River Comprehensive Care Center in Corbin. The facility—with 41 beds for men and 15 for women—has been at capacity for several years, he said.”

“About 60 percent of Clay’s residents are on Medicaid, up from 35 percent three years ago. It is among the most highly concentrated Medicaid populations in the country,” Galewitz writes. Steve Shannon, executive director of the Kentucky Association of Regional Programs, says Medicaid’s expansion has not created more addicts. He told Galewitz, “People who were uninsured were pretty resourceful when it came to finding drugs.”