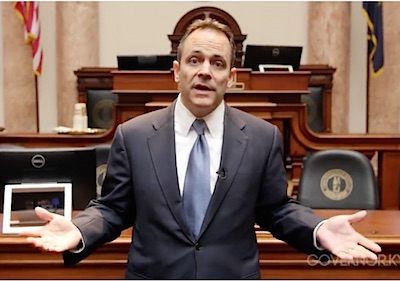 FRANKFORT, Ky. – (Date: 02-09-2017) — Gov. Matt Bevin used his second State of the Commonwealth address Wednesday to warn lawmakers he’ll be asking them later this year for a painful vote for a tax reform plan that will address the state’s crisis in funding public pensions.

“We’ve got to do these together – pension and tax reform. They’ve got to be done together because if they’re not done together this state is going to become financially insolvent,” Bevin said. “It will not be easy, frankly. It will not make you popular with everybody.”

Bevin said a realistic estimate would put the combined obligations of Kentucky’s public pension systems at more than $80 billion dollars – a problem that can’t be solved by “a tax neutral tax plan. It’s not. We can’t afford for it to be. That’s a straight up fact.”

The governor spoke for nearly 56 minutes in a rambling speech to a joint session of the Kentucky House and Senate in the House chambers. He touted accomplishments of the past year and said the remaining weeks of the current regular legislative session will see action on priorities such as charter schools and “outcomes-based funding” for state universities.

But the tax and pension reform bills will wait for a special legislative session later this year – and that’s when Bevin said lawmakers will have to take a stand on the most difficult public policy questions.

Bevin said his plans in those areas are still being drafted. In general, though, he said, “I’m talking about bringing every single sacred cow that people think can’t be touched on the tax front, bringing them all out of the barn. And some of those sacred cows are going to be returned to the barn as sacred cows, and some of them are going to be turned into hamburger. And I’m going to need your help to make it happen.”

Bevin said his plan will close some loopholes and tax breaks that accountants refer to as “tax expenditures.” He said the current Kentucky tax code has more than 300 of them and that together they exempt more potential revenue than the state takes in in actual revenue.

Because his plans are still in the works, he said he could give few details of how he’ll propose to change the tax code.

“This is a state that needs to move ultimately from production-based tax economy to a consumption-based tax economy. We will get rid of the inventory tax, we will get rid of the death tax, …” he said. “But we have to do this as part of a broader plan that not only lowers the overall tax burden, broadens it, makes if more fair, easier to understand, more in line with federal policies.”

Most important, he said reform “has to be done in a way that allows us to be able to pay off the obligations that we have. … So please get ready, it’s going to be hard to do.”

The governor said an honest estimate of the combined liabilities of Kentucky’s public pension systems is far higher than the often-reported $30 billion to $38 billion estimates. He said, “We have an $82 billion pension problem – $82 billion is what is owed. That is just short of $19,000 for every single man, woman and child in Kentucky. And it touches all of you.”

He said, “We have an obligation to the people of Kentucky, and we had better clean it up.”

After the speech House Majority Floor Leader Damon Thayer, R-Georgetown, said he was not surprised by the governor’s remarks because he said, “the governor’s been pretty transparent about where he wants to take us.” He said he believes lawmakers are up to the challenge of addressing both tax reform and pension reform at a special session later this year.

House Minority Leader Rocky Adkins, a Sandy Hook Democrat, said he agrees in general with Bevin that pension and tax reform need to be addressed. But Adkins took issue with other topics mentioned by the governor. For instance, Adkins said that he and most Democrats oppose charter schools because they siphon off funds for public schools. “I stand up for public schools and our public school teachers,” Adkins said.