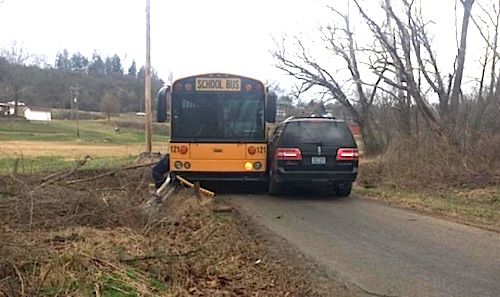 At just before 3:30 P.M. Lawrence County E-911 received a call of a SUV running into the front wheel of the driver side of a school bus on Old Lick Creek Road, less than a couple of hundred yards below Lawrence County High School and the County school bus garage. 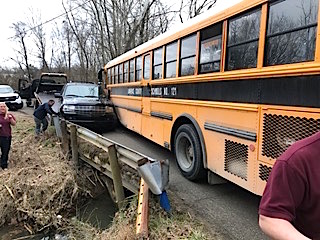 The crash on Old Lick Creek Road caused the temporarily closing of the roadway during the investigation.

When emergency responders initially arrived at the crash scene, all of those in the SUV and on the school bus stated they were fine and no injuries had happened.

However, after Lawrence County Emergency Management Agency members cleared from the immediate scene to block traffic from the crash area, an ambulance was requested for one minor injury from the passenger vehicle.

After the EMS ambulance arrived on scene, they ended up transporting one student on the bus and three individuals from the passenger vehicle to Three Rivers Medical Center for minor injuries.

All of other the students on the bus were transferred to another school bus to be sent home.

It is unknown what led to the crash, but the Louisa Police Department is investigating.

Supt. Dr. Rob Fletcher said this afternoon that it will possibly next week before the accident report is made public.

HEROIN CHARGES AMONG THIS WEEK'S ARRESTS