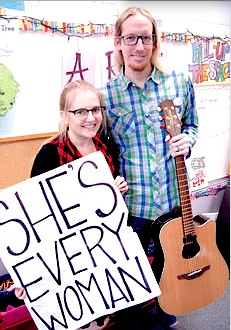 Between sessions with her students Jan. 27, Jessica Page carefully crafted a visual song request for her and husband Jake’s favorite, “She’s Every Woman,” that the artist could read from the stage at U.S. Bank Arena in Cincinnati.

“I usually write in script, but I printed this poster so he could see it, and I tried to make it really clean and neat,” she said.

As Campbellsburg’s art and humanities teacher, Page brings music into the classroom. She can play flute, clarinet, piano and recorder, and now she plans to put in much more practice on her stringed instrument.

“I’ll probably start with some basic chords and work my way up,” Page said. “It’s really hard to practice because my tuner fell and broke. The robot vacuum knocked it off.”

Jessica and Jake share a musical appreciation that’s crescendoed since they met.

“If I never would have met Jake, I probably wouldn’t have gone to any concerts, much less all of Garth Brooks’,” she said.

Because they’ve attended five of Brooks’ concerts since 2010, the couple knew the song they wanted to hear and had an idea about how to make the request.

“The one we like so much is never on his real set list, so that’s why we took the sign there,” Jake explained. “Usually we just want to hear like one song in particular. I was just thrilled to death when he started playing it, let alone with everything after.”

Jessica, Jake and others in their group did what they could to attract Brooks’ attention to the song request. Anytime the singer would look their way, Jake said Jessica would start jumping around, and the others spotlighted it with their phones.

“You always think you’re going to get lucky, but once you get in there and see the thousands of people holding signs with different songs on there, you’re like there’s no chance,” he said.

When it happened, a cell phone video posted to Facebook by Jim Seward, a teacher from Bellevue, shows Brooks singing and playing at the edge of the stage, beckoning to Jessica out of the whole crowd in the arena.

When the video picks up Jessica in the audience, she’s singing along.

After the song finishes, Brooks leans over and talks to Jessica before handing her his guitar pick, capo and, finally, slinging off his guitar, to the delight of the audience.

“I remember walking down there,” she said. “It was almost like I was drawn to him, like he was singing to me. I remember singing along with him, and then I thought to myself, ‘Oh, please, don’t screw the lyrics up, because he’s watching you.”

“She didn’t remember anything after it happened,” Jake said.
“Jake showed me the video — it was like, ‘Oh my God, I touched him!’” Jessica said. “I cried all night. I didn’t even tell anyone. I called my mom and then I texted Mark [Johnson], our principal, and that was it — hit the important people.”

Family members quickly spotted the video Seward took on Facebook, which was Seward’s hope, so Jessica could have a copy. Jake plans to save that video along with his own recording for posterity.

“[Jim] seemed about as excited as we were, and he didn’t even get anything,” Jake said.

“We should send him a guitar pick,” Jessica said.
Brooks left two picks as back ups in the instrument, plus handed another to Jessica. A fourth rattled around in the guitar until Jake made a close study of it back at their hotel room. Jake briefly worried he broke the guitar before the fourth pick fell out.

Adding to the guitar’s air of authenticity are the scratches on the back from hitting Garth Brooks’ big belt buckle, Jake and Jessica noted. The instrument face also has wear where Brooks would strum it.

When she returned to work, Jessica offered the guitar to the children and her fellow teachers as a show and tell of her own.
“It’s been handled quite a bit,” Jake noted. “It’s made the rounds.”

What did Jessica think when Brooks catapulted her into the spotlight at the concert and on social media?

Though the guitar made an appearance at Campbellsburg Elementary, the couple plans to keep it at home. Jake wants to lodge it in a big display case, along with the videos and photos, so the family can enjoy the gift from the megastar for generations to come.

“I think it’s awesome,” Jake said. “It’s like Michael Jackson’s glove right there. How often does [Brooks] sing to someone? He sang to you, our song, on camera! Not only is that a guitar, that’s from the man!”