Growing up in Louisa – SuperBowl!

Growing up in Louisa – SuperBowl!

So you say there was no SuperBowl back then? You’d be correct, but for me the roots of love for the game were already developing. The sport was already ingrained in America’s heart and had been for generations. For me, it started when I was a very young kid. My mom would take me by the hand and walk me to the football field that was neatly nestled behind the high school. After all, she was young and had only just graduated. She undoubtedly felt a strong draw to the customary Friday night thrillers. Besides, this was a way for a young mother to stay in touch with her many friends. I have no doubt that she also wanted to support ‘her’ Bulldogs. I’d like to suggest that once a Bulldog, always a Bulldog.

As a new, but caring mother she diligently wrapped me up tightly in hopes that I’d stay warm on those chilly evenings. Her efforts were sometimes overdone, so the heavy coats, scarf, and hat, made me hot. I’d try to shed this or that, but whatever I loosened she would reinstate. It sent a message that she cared, even if her concerns were misdirected. Since I was capable of learning about life, I reasoned that my only hope was for her to become distracted, either by meeting a friend, or by the excitement of the game we came to watch. Because of these Friday night trips to the old ‘gridiron,’ I learned to enjoy the game as it was explained to me. As part of the package, I also learned the LHS fight song that is still part of my life. I grew to love the crowds, the band, and the cheering. I even loved the sound of those shoulder pads striking another when the ball was snapped. It was helmet-to-helmet and pad-to-pad warfare!

Years later, I enjoyed watching football on our new television that which was sitting proudly in the corner of our living room. I remember watching the Rose Bowl Parade all the way from Pasadena, California. The floats were pretty, but since TV was black & white in those early days, I really had no idea of how pretty they really were. The screens were small, too, so it wasn’t exactly as if I was standing on the sidewalk, watching.

More importantly, there were to be four major football games to follow. The Rose Bowl, the Cotton Bowl, the Orange Bowl, and the Sugar Bowl, would keep me glued to the TV for hours. Thinking back, there may have been more bowl games, but I don’t recall any others that we were able to pick up on the three stations available. With our primitive antenna the signals were very foggy or ghostly. My cousin and I would spend half a game just trying to adjust the antenna. One of us would go outside and turn the pipe that held the antenna while the other stayed inside and hollered when the reception improved. By today’s high definition standards, we barely saw those games, but they meant everything to us. No matter how bad the picture, it was better than listening to radio and it was, after all, ‘football.’ 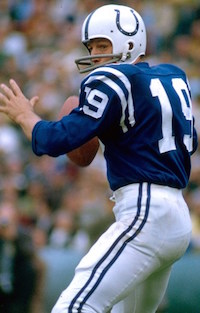 College ball was only part of our football experience in those days. Nearly everyone I knew would watch pro-football (NFL) on their respective televisions on Sunday afternoons. Those wonderful Sunday naps we got in after church, were put on hold so we could watch famous players perform in various cities around the country. In Baltimore, Johnnie Unitas, a star quarterback, would take his team from behind to win in the final seconds. Game after game, he managed to drive the length of the field with short passes, and other time management techniques. We would sit on the edge of our seats as the time clicked by and another short pass was completed. The win would be the talk of the town over the next few days. What a hero!

Another great player I recall watching was the famous fullback, Jimmy Brown, who played for the Cleveland Browns. He was a heavy, muscular, full-back with inhuman strength and balance. He would run directly into the defensive line and drag them for tens of yards to make first-downs and often even more. Many times we’d see him score with four or five big linemen hanging onto his legs. Other times he would break loose for big yardage downfield, as he twisted, turned, cut back and forged ahead. He simply just wouldn’t allow the opponent to tackle him without a fight. When he was finally tackled he would slowly rise back up onto his feet without any grandstanding whatsoever. He would simply rejoin the huddle, ready to take up the challenge again. Until he was given another handoff, he was the picture of a man too drained, or maybe unconcerned, to make another play, but when he had the ball he came to life. He was so fast, hard to grab, and nearly impossible to take down. Tackler after tackler would bounce off as Jim lowered his head and continued on past the linebackers, growing ever closer to the end-zone. The crowd would cheer with excitement over his great feats. That man was a real football player and defined what a fullback should be. 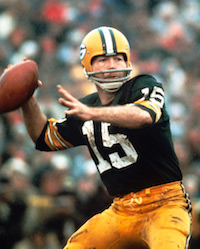 We also watched Bart Starr and Paul Horning under the leadership of that grand coach of coaches, Vince Lombardy, the guy the Superbowl Trophy was named after. In those northern reaches of Green Bay, Wisconsin, the snow seemed always to be falling. The ground was often frozen to the point that cleats would slide instead of penetrate. While it was comical when one player or another lost their footing, the game went on. Somehow, the wide receivers would pull the ball out of that snowy cloud and sprint on toward the end-zone. For many of us, we’d take our hats off when we heard names like those already mentioned, or others such as: Raymond Berry, Otto Graham, Lou “the toe” Groza, Len Ford, Gino Marchetti, Sonny Jurgensen, or Gale Sayers. Indeed, many are the names enshrined in the Football Hall of Fame, as well as the hearts of our generation. We were the ones blessed to see the feats. 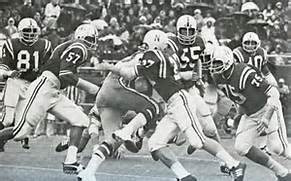 Over the years I’ve had on again, off again, relationships with watching college football. I generally preferred professional football, but over the last ten years, or so I’ve rediscovered college games. It has produced some amazing athletes who have continued to fill the ranks of the pros. I’ve become a fan. Not one who has to buy a vehicle with school colors, or fly flags with the team name. I don’t own a lap blanket with a team logo, and I’m still confused connecting the various conferences. Still, I am a fan. The people who know me know that I’m not particularly loyal to any school. Oh, I enjoy the Army/Navy game, but I watch to see how well they played, and who won is secondary. I can watch FSU, LSU, USC, or Ohio State, UNC, Georgia, Alabama, Va. Tech, UVA, or UK and enjoy watching them without too much ‘buy in’ to a certain team. My week isn’t ruined if a certain team loses, but rather I hope they lick their wounds and learn something. Games should make the players grow, whether they win or lose. As for me, it’s not that I don’t like any of them. I like them all. I think that rose out of my stint as a Little League baseball umpire. I loved the game, but didn’t care which team won. To my way of thinking it’s not the team, but the game that counts. Of course, I’m a strong fan of the Bulldogs, because that’s where it all started for me.

Like everyone, I like to see great offensive plays, but a well-turned defensive play can be like a work of art, too. I think that any competitive sport can rise to become an art. At my current old age, I have seen my share of college and professional games in person, but I like watching high definition games in my den better. I can see better, have some ‘expert’ explain what happened, see the replay, and if too lopsided, I can flip through and find a more competitive game. After all, a full pantry is nearby, the bathroom isn’t crowded, the weather is perfect, no unruly fans are acting out, and parking is a cinch. I don’t know about you, but I have enjoyed some exciting bowl games and can’t wait until next year. 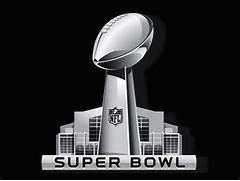 This week we come to a time which for me, signals the end of yet another season. That’s when I usually hit the doldrums. When the ‘Superbowl’ game and its commercials come into our living room or den, friends and family gather, and the party begins. Like a bunch of crows sitting on an electrical line, we take our places and line up for the ‘big show.’ The American male, and of course a rapidly growing crowd of football-fan females, become glued to TV sets across the world. Even our military out in far-flung places gather to watch the game. The problem for me is that when the game is over… it is all over. The fat lady has sung…

Sadly, we fans are forced to go ‘cold turkey’ and turn our attention elsewhere. While many have answers to that, like maybe March Madness, or some other thing, I continue to suffer withdrawals from the absence of football. I have tried recording games during the season in hopes of replaying them, but once I’ve seen a game I can’t help deleting it because the thrill is gone. Amazing plays or not, I’ve seen them and know the next play, good or bad. In fact, if a play is really good then thanks to the media it will be rerun over and over by until the unbelievable finally becomes believable. Now the standard for greatness is set higher as players try to emulate that miracle event. Those plays are kicked around at the barber shop, at work, church, and at other meeting places. We’ll remember the really good ones, and for that matter, some of the really bad ones, too, for years. After all, isn’t that what it’s all about?

The bottom line is that many of us will miss football until it starts up again next fall. Everyone should give them room to handle their funk. Meanwhile, maybe we will finally turn to that ‘honey-do’ list that has been gathering dust. Man! I can’t believe it! It’s about to be over again!

THELEVISALAZER.COM'S --DO YOU KNOW ME?