TRUMP BAN ON TRAVEL COULD LEAD TO DR. SHORTAGE 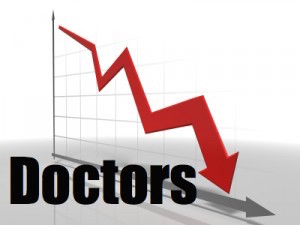 President Trump’s temporary travel ban and promised “extreme vetting” of immigrants from Iran, Iraq, Libya, Somalia, Sudan, Syria and Yemen, and perhaps other majority-Muslim nations, could hurt medical education in the U.S., leading to increased doctor shortages in rural areas and inner cities, says a study by researchers at the University of Pittsburgh, published in The New England Journal of Medicine.

Data from 2015 by the Educational Commission for Foreign Medical Graduates (ECFMG) shows that 24 percent of all practicing physicians in the U.S. are from other countries. The 2016 Main Residency Match found that 7,460 international medical graduates—21 percent—were not U.S. citizens.

While there are no published numbers available on the country of origin of U.S. doctors, a 2014 report by ECFMG and the National Resident Matching Program found that in 2013, “753 applicants whose country of citizenship at birth was Iran, Iraq, Libya, Sudan, or Syria; 299 of these (40 percent) were matched into a U.S.-based residency program.” (Map: Health professional shortage areas)

International medical graduates “who train on a J-1 visa (a non-immigrant visa sponsored through the ECFMG Exchange Visitor Sponsorship Program) are required to return to their home country for two years or obtain a J-1 waiver clinical job in order to stay in the U.S.,” the study says. J-1 waivers are usually granted through a program that “can extend a physician’s stay in the U.S. if they commit to serving in rural areas and inner-cities. “In 2014–2015 there were 9,206 sponsored J-1 physicians from 130 countries, and 6 of the top 10 countries of origin—accounting for a total of 1,879 J-1 physicians—have Muslim majority populations.”

Parija Kavilanz reports for CNN, “The American Medical Association, which represents medical doctors across the country, sent a letter Wednesday to the Department of Homeland Security asking for clarity on the visa ban.” The letter said: “While we understand the importance of a reliable system for vetting people from entering the United States, it is vitally important that this process not impact patient access to timely medical treatment or restrict physicians and international medical graduates (IMGs) who have been granted visas to train, practice in the United States.”

The AMA said the ban would worsen access to health care in rural areas, noting that foreign medical graduates are more likely to serve in poor, under-served communities, Kavilanz writes.

Matthew Shick, director of government relations and regulatory counsel with the American Association of Medical Colleges, told Kavilanz, “There could very well be a patient in a rural area who had an appointment with their doctor this week and the doctor was not allowed back into the country . . . at a time when the United States is facing a serious shortage of physicians, international medical students are helping to fill an essential need.”