COURT: KENTUCKY MUST PAY RELATIVES WHO TAKE IN FOSTER KIDS 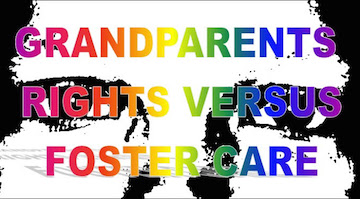 Friday’s ruling by the U.S. 6th Circuit Court of Appeals could prove a budget blow to the state’s human services agency, already straining to care for a growing number of children removed from homes because of abuse or neglect.

But it is welcome news to children’s advocates who argue that in many cases, grandparents, aunts, uncles and others are stepping up to provide free care that the state would otherwise pay foster families to provide, even when relatives can ill afford the additional cost and responsibility.

“The law provides for help on behalf of the children, and Kentucky needs to follow the law,” said Richard Dawahare, a Lexington lawyer who filed the lawsuit on behalf of a low-income woman who was denied foster payments to care for two great-nephews. “Budget issues are real, but we’ve got to find a way to raise revenue.”

Terry Brooks, executive director of Kentucky Youth Advocates, called the ruling “bold and stunning” and said it will benefit children. Although it may cost the state more initially, it could pay off through better outcomes, he said.

“This ruling is good for kids and in the long term, will actually give the commonwealth a real return on investment,” he said.

Tim Feeley, deputy secretary of the Cabinet for Health and Family Services, which oversees foster care in Kentucky, said state officials are still evaluating the decision and have no comment at this time.

The ruling applies only to relatives providing temporary foster care while the children await a permanent placement, such as adoption or returning home. Should the relative obtain permanent custody, the foster payments would end.

Jefferson Family Court Chief Judge Paula Sherlock said that while the decision appears narrowly aimed at individual cases where the state fails to identify a permanent placement for children, it raises an important issue.

“We financially support kids in the foster care system but we don’t financially support relatives who are trying to take care of children,” Sherlock said. “It is ironic that foster families are the only ones to get stipends instead of individual families who could really use the support.”

The state pays foster families an average rate per child of $77 a day, or about $2,310 a month, to care for children in its custody though rates vary depending on the needs of the child. About 7,900 children are in state custody, about 300 of them with relatives, according to the cabinet’s website.

The court ruling noted that the cabinet’s practice has been to pay foster families trained and licensed by the state but does not pay relatives willing to take in children on a foster basis, even though the cabinet must inspect the relative’s home and approve the person as a caregiver.

“To the extent the cabinet’s failure to make (foster) payments turns on the distinction between relative and non-relative foster care providers, it plainly violates federal law,” said the opinion of the three-judge appeals panel.

The ruling also was welcome news to advocates for reinstating Kinship Care, a state program that paid relatives who obtain permanent custody of children removed from their homes a stipend of about $300 a month. It was suspended in 2013 because of state budget cuts.

“I’m thrilled with this ruling,” said Norma Hatfield, an Elizabethtown woman who has permanent custody of two grandchildren and is lobbying the state to restore Kinship Care on behalf of thousands of Kentucky grandparents and others caring for children.

Hatfield said it shows a court has recognized the plight of such relatives. Even though many relatives willingly step up to take in such children, “the work is still hard, and the cost is still there,” she said.

Hatfield is working to generate support for Senate Bill 29, sponsored by Sen. Dennis Parrett, an Elizabethtown Democrat. The bill would restore the state’s Kinship Care program and Hatfield has created an account where people can email their support to Kinship.care.for.kentucky@gmail.com.

“Kentucky legislators need to do something and quit ignoring the struggling relative caregivers taking in these children,” she said.

Sherlock said restoring Kinship Care would be an important step toward helping the many poor families involved in family courts because of child abuse, neglect or dependency, the last a situation in which a parent can no longer care for a child in cases such as illness or death.

Sherlock said she recently had an aunt in her courtroom forced to relinquish custody of a nephew because of an eviction. Had the aunt had some financial assistance, she might have been able to keep the child in a stable home, Sherlock said.

“I think we’ve been in a rut for a long time on how we view those foster care payments,” she said.

Dawahare said it’s not clear how the ruling will affect his client, a great-aunt with limited means who was willing to take in two young boys. The appeals court sent the case back to U.S. District Judge Danny Reeves to resolve whether the great aunt is entitled to the payments.

That hinges on a dispute over whether the family court judge had released the children from the cabinet’s custody. If not, the appeals court found, she is entitled to payment.

But Dawahare said the broader impact of the decision is that relatives providing foster care are entitled to payment as long as the children are considered in the cabinet’s custody.

“This will help families,” he said. “We’re dealing generally with poor families but they have a big heart. They’ll do anything to help, but it’s a struggle.”

LMS FOOTBALL PLAYERS SIGN ON TO BE FUTURE BULLDOGS