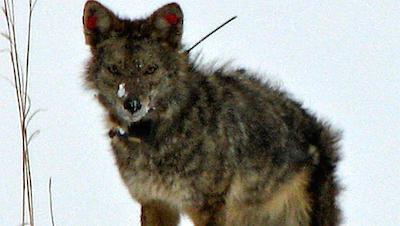 By Keith Lawrence
The Messenger-Inquirer

Date: 02-02-2017 — On Jan. 7, passengers on a Cape Air flight from St. Louis were surprised to see a coyote watching them from beside the runway when they landed at Owensboro-Daviess County Regional Airport.

They shouldn’t have been.

In January 2014, Lt. Gov. Jerry Abramson was running a few minutes late for his speech to the Greater Owensboro Chamber of Commerce’s Rooster Booster Breakfast.

He apologized, saying his plane was delayed by a coyote on the runway at the airport.

“We had to go back up and make another pass,” Abramson said.

Coyotes are an increasing problem at airports all over the country.

In November, five coyotes living on LaGuardia Airport property were captured and euthanized.

That sparked outrage from animal rights activists who began trying to protect the remaining coyotes.

In October, newspapers reported that British Columbia had seen at least 28 coyote problems at four airports across the Canadian province in the past 12 months.

Newspaper accounts said the coyotes caused no accidents, but they did cause planes to abort landings and delay takeoffs.

In late December, Arlington (Texas) Municipal Airport reported that coyotes were digging under its perimeter fence and getting onto runways.

Bob Whitmer, manager of Owensboro’s airport, said, “Controlling coyotes is only one part of the airport’s wildlife management plan. We have a written plan, which defines routine staff responsibilities to control animals and birds that may pose a threat to passengers, pilots and aircraft.”

The airport has a contract with the U.S. Department of Agriculture’s Animal and Plant Health Inspection Service to trap and remove coyotes from airport property, he said.

Last year, Whitmer said, the agency trapped and removed 15 coyotes from around the runways.

A USDA official in Louisville said he couldn’t comment on the program and referred questions to a spokesman in Maryland, who didn’t return phone calls.

The USDA APHIS Wildlife Services website says the agency’s mission “is to provide federal leadership and expertise to resolve wildlife conflicts to allow people and wildlife to coexist.”

Whitmer said, “USDA biologists are on airport property sometimes five days a week, but they are not here every week. These biologists are trained to know when coyote activity is more likely, and they concentrate their efforts on these times.”

He said the agreement has been in effect for a couple of years, and “the reduction in coyote numbers is quite evident to airport maintenance staff.”

He said the airport board spent $60,000 to hire a firm to spend a year at the airport to determine what wildlife is on the property and what actions should be taken to control it.

He said air traffic controllers are in the control tower 16 hours every day, and they are also scanning the field for wildlife.

Whitmer said the airport staff also makes sure that nothing on the property is attractive to wildlife.

Only crops that don’t attract birds can be grown on airport property, he said.

Whitmer said the staff “routinely inspects approximately 10 miles of fence surrounding the airport’s 880 acres to ensure no animals can migrate onto the airport operations area.”

But coyotes are wily animals.

And some of them still get through.

Coyotes have been appearing in the county in increasing numbers since the 1970s.

And they began moving into Owensboro about 1990.

“I don’t think we could have any more in this area,” Scott Harp at the Kentucky Division of Fish & Wildlife Resources’ Calhoun office said in 2010. “They’re pretty established here.”