COAL PRODUCTION DOWN SHARPLY IN 2016; WYOMING STILL NO. 1; KENTUCKY DROPS FROM 3RD TO 4TH

(Wednesday, February 01, 2017) — The national decline in coal production and employment continues, but with differing effects among the states. Wyoming was still the biggest coal producer in 2016, and West Virginia remained No. 2, but Illinois supplanted Kentucky at No. 3.

Like other leading states, Wyoming faced incredible lows in 2016. Coal production in the Powder River Basin in 2016 reached its lowest levels in 20 years, reports The Associated Press. Production from the basin, which lies mainly in Wyoming, was 283 million tons, almost all the state’s production of 293 million tons, Heather Richards reports for the Casper Star Tribune. 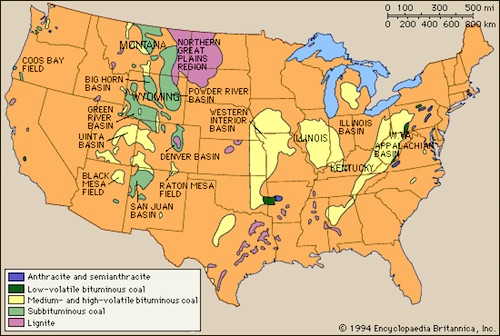 This marked the first time since 1998 the region failed to surpass 300 million tons, AP reports. Last year’s total was down 78.1 million tons from 2015, the largest single-year drop ever.

“Since 2013, competition with natural gas, the retirement of coal-fired power plants and environmental regulations have led to slowing production of coal, leading to 30-year price lows and the mass Wyoming layoffs of last spring,” Richards reports. “Production generally averages around 100 million tons per quarter in Wyoming, but that figure dipped to 86 million tons in the second quarter of 2015 before the bankruptcy run.. . . Forecasts for the future of the coal industry have been varied, but most show an eventual decline as natural gas competition and utility demand changes the landscape for U.S. electricity generation.”

Despite the reduced levels, Wyoming remained the biggest coal producer, followed by West Virginia, then Illinois. Kentucky, which had been No. 3 since 1994, was fourth.

“Kentucky led the national coal production from 1971-1978,” Bill Estep writes for the Lexington Herald Leader. But according to a report published Tuesday by the state Energy and Environment Cabinet, “Kentucky’s mines turned out 42.5 million tons of coal in 2016, a drop of 30.7 percent from 2015,” Estep writes.

“Jobs were equally anemic” in the Kentucky coalfields, Estep writes. As of Dec. 31, Kentucky’s estimated employment in the coal industry, “was 6,371, down 24.2 percent compared to the last quarter of 2015.” The losses were mainly in the eastern coalfield, which is part of the Appalachian Basin; the western coalfield is in the Illinois Basin. For the latest coal-production data from the Energy Information Administration, click here.

KENTUCKIANS USE E-CIGARETTES MORE THAN MOST OTHER STATES