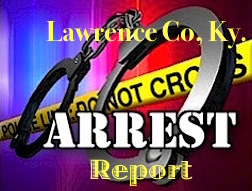 Michael Pennington Jr., 30 of Grayson Kentucky was arrested 1-28-17 by Deputy Mark Wheeler on N. Lock Ave. for OPERATING A MOTOR VEHICLE UNDER THE INFLUENCE OF ALCHOL/DRUGS (.08) 4TH OFFENSE OR GREATER.

Jason Prince, 36 of Rush, Kentucky was arrested on 1-27-17 by Deputy Dwayne Bowen on HWY 32 for NO REGISTRATION PLATES, NO REGISTRATION RECEIPT, FAILURE TO PRODUCE INSURANCE CARD. THE OFFICER ALSO SERVED THE DEFENDANT WITH A BENCH WARRANT ON BEHALF OF THE COMMONWEALTH OUT OF CARTER CO.

Adam Maynard, 33 of Pilgrim, Kentucky was arrested on 1-26-17 by LPD Officer Mack Wilhite at the Valero Station in Louisa for NO MOTORCYCLE OPERATER’S LICENSE, NO INSURANCE, NO REGISTRATION AND GIVING A FALSE NAME.

The defendant was also arrested on a Bench Warrant out of Martin Co. The officer arrived at the Valero after getting the call that the defendant had been in the parking lot for several hours asking customers for money to get gas. When the officer arrived the subject was standing outside of the vehicle in front of the gas pump and not pumping gas. The clerk advised that he was blocking the gas pump from other customers. When approached, the subject gave the officer false information. When the correct information was given it was found that Mr. Maynard had 4 warrants out of Martin Co.

Jeremy Vanover, 39 of Louisa, KY. was arrested at Advance Auto in Louisa on 1-25-17 for 2 LAWRENCE COUNTY BENCH WARRANTS.

Gregory Allen Witham, 32, of Ulysses, Kentucky; was arrested on January 24, 2017, at 3:52 P.M., by trooper Forrest Newsome, of the Kentucky State Police, and was charged with: • FAILURE TO APPEAR [2 SEPARATE COUNTS].

James F. Gartin, 53, of Ashland, Kentucky; was arrested on January 25, 2017, at 1:06 P.M., by trooper William Layne, of the Kentucky State Police, and was charged with: • RAPE, 1ST DEGREE – INCAPABLE OF CONSENT-PHYSICALLY HELPLESS, • SODOMY, 1ST DEGREE – INCAPABLE OF CONSENT-PHYSICALLY HELPLESS, • ENDANGERING THE WELFARE OF A MINOR.