SKUNK SIGHTINGS ON THE RISE 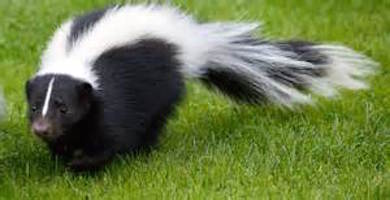 Between dusk and dawn, the pungent mammal often is seen in yards, near overflowing garbage cans and attempting to cross roadways. Amy Aldenderfer, Hardin County Extension agent for horticulture, said there is a reason: Mating season for skunks runs from February through April.

“The seasons have shifted a little bit,” she said, meaning the recent warm weather has brought them out of their torpor.

Hardin and neighboring counties are home to striped and spotted varieties. Black skunks featuring a white stripe from nose to tail typically is seen.

Colder temperatures will cause a skunk’s metabolism to slow down, but not necessarily go into a state of hibernation like bears, Aldenderfer said.

“(It’s) kind of like what humans do in January when we don’t have any energy,” she said.

Skunks also are not seen just in rural areas any longer, adapting to be comfortable in more populated areas such as in subdivisions, she said.

Feeding mostly on insects — grubs, beetles, grasshoppers, crickets and the like — Aldenderfer said skunks tend not to bother garbage cans.

If trash is left lying on the ground, however, a skunk will find it, she said.

“Oh my gosh, my whole turf has been rooted up by something,” she said, mimicking a typical caller.

When Aldenderfer goes to investigate, she often determines the culprit is a skunk.

“Skunks will dig with their front feet to dig up the grubs,” she said. “It looks like somebody took a roto-tiller that’s only 4 inches wide and roughed up the grass.”

Situations such as this means skunks are looking for food.

The Extension agent does not recommend attempting to catch a skunk and transporting it to another area. There is a risk of getting sprayed by the animal, she said.

Trapping a skunk, delivering it and releasing it in a wooded area miles away also can set it up for possible death, Aldenderfer said.

She said the skunk would be in unfamiliar territory and not know where food or water sources could be.

“It’s like taking a human and sitting them out in the middle of the Arctic and saying, ‘OK, survive,’” Aldenderfer said. “‘I don’t want you where you are, so survive somewhere else.’”

Skunks are capable of nesting, or “denning,” beneath porches, decks, sheds and crawl spaces, she said. Brush piles, trash piles and tree stumps also provide shelter for a skunk preparing to have their young, called kits.

Aldenderfer said skunk sightings will be more frequent during the early-morning and evening hours until mating season has ended.