Three Lawrence County residents had the distinct displeasure of double whammy of getting arrested twice in one day this week.

On January 23, 41 year old Cherry L. Kincaid of Louisa was arrested at 2:42 P.M. by the Louisa Police Department at the Family Dollar Store in Louisa on the misdemeanor criminal charge of Theft by Unlawful Taking, Shoplifting Under $500.

Kincaid posted bail within a couple of hours but at 7;40 P.M. by patrol officer Keith Maynard of the Painstville Police Department on the charge of • PUBLIC INTOXICATION-CONTROLLED SUBSTANCE (EXCLUDES ALCOHOL).

After her second arrest Monday evening, Kincaid was not released from the Big Sandy Regional Detention Center until Wednesday afternoon. 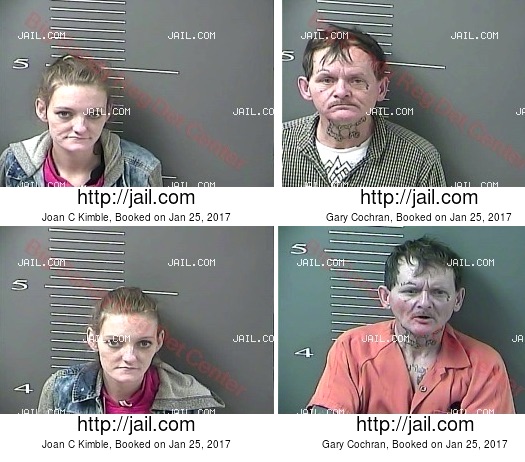 On Wednesday January 25, a Lawrence County man and Lawrence County woman should have stayed in their bed in the early Wednesday morning for the pair, like Kincaid, were arrested together twice five hours apart, though their arrests occurred in two neighboring counties.

Joan C. Kimble, 25, and Gary Cochran, 49, of Lomansville, were arrested at 5:49 A.M. in Martin County by deputy Blevins of the Martin County Sheriff Department,

Kimble was charged with: • THEFT BY UNLAWFUL TAKING OR DISPOSITION AUTO – UNDER $500.

Cochran was charged with: • THEFT BY UNLAWFUL TAKING OR DISPOSITION AUTO – UNDER $500, • DISORDERLY CONDUCT, 2ND DEGREE

After their second arrest, both Joan Kimble and Gary Cochran remain incarcerated at the Big Sandy Region Detention Center as of late Wednesday night.