‘Kentucky’s Attorney General Has a Duty To Perform’, Governor says 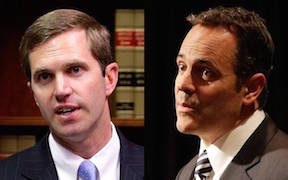 The General Assembly has recently enacted two important bills to protect unborn children:  Senate Bill 5, which bans abortions after the 20th week of gestation because that is the point at which fetuses can feel pain, and House Bill 2, which seeks to ensure that women are fully informed before choosing an abortion.  Who can argue with the desire to make sure that women have all available medical information before making such a grave decision about whether to undergo an abortion?  Apparently the ACLU—and the Attorney General.

The ACLU has sued the Commonwealth on behalf of abortion doctors, claiming that the disclosures required by House Bill 2 violate the doctors’ First Amendment free speech rights.  I wish I were kidding.

The Attorney General initially indicated that he would defend House Bill 2.  In a January 10 statement, he said that he has a “duty to defend laws where the constitutionality is questionable.” He then went on to state that due to appellate court rulings, in his view, HB2 is worthy of a defense but SB5 is not. The only part of the AG’s statement that I agree with is that he has a duty to defend the laws of this commonwealth. It is not his prerogative to pick and choose which ones.

But, after backlash from his liberal supporters, the Attorney General quickly backed away even from his vow to defend House Bill 2.  In a court filing this past Tuesday, he said that he “does not take a position on the [ACLU’s] Motion for a Temporary Restraining Order.”  In non-lawyer speak, that means he was telling the Court that he does not care whether or not the Court prohibits the enforcement of House Bill 2.  Because the Attorney General is not making a substantive defense of House Bill 2, my office has done so in filings with the Court.

With his latest about face and abdication of responsibility, the Kentucky Attorney General is now taking the position that he will not defend either HB2 or Senate Bill 5, a ban on abortions performed on babies older than 20-weeks gestation. Rather than evaluate Mr. Beshear’s potential motives for such a stunning pivot, the discussion should be whether he actually has this much latitude in determining what duties of his office he will or won’t perform.
Failure to conduct a vigorous defense of statutes passed by the General Assembly and signed into law by the Governor, even when controversial, is a threat to the rule of law and the separation of powers that our system of government is based upon.  House Bill 2 was approved by the General Assembly after extensive deliberation. What’s more, HB2 passed with significant bipartisan support, and 83% of the legislature voted for it.
By refusing to defend laws duly created by our state’s constitutional process, the Attorney General is attempting to exercise an executive veto power that he does not possess. If Attorney General Beshear only intended to defend laws that he deemed worthy, he should not have sought his current office. The primary duty of the office he holds is to defend state laws against constitutional challenge.

The Kentucky Attorney General’s job is to defend Kentucky laws created by the legislative process. It is not his duty or his right to make an independent evaluation of the law’s merits. In so doing, he undermines the authority of the other two branches of our state government.

Setting the legal argument aside, however, what is the most basic duty of all government? Government exists to protect and defend pre-existing natural rights. The right to life is the most fundamental of all those rights. What’s more, the duty of government to defend rights is most critical for those who cannot defend themselves.  A 20-week-old unborn child has a basic right to not suffer horrific pain while being aborted. A prospective mother, despite AG Beshear’s pivot on the issue, has a right to have the best medical information available about her unborn child. The reason HB 2 and SB 5 both passed overwhelmingly and were signed into law, is precisely because the merit of these two facts is so obvious.

The Attorney General and his team of more than 80 taxpayer funded attorneys, should do their jobs and defend Kentucky’s laws. If, however, the Attorney General won’t carry out his duty, our administration will do it for him. The office of the Governor will defend the will of the voters and fight to protect the rights of all Kentuckians.