SCHOOL PERSONNEL SEEK CAUSE OF UNKNOWN ‘RASH’ AT LOUISA EAST 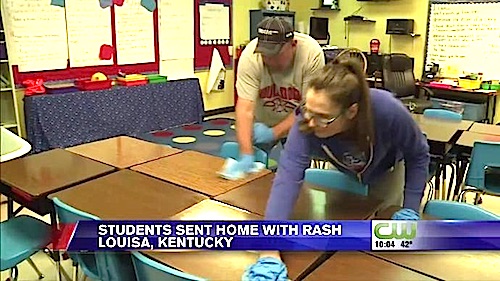 Even though school officials determined that the problem took place in only one area of the building, and no other students develop any other symptoms throughout the rest of the school day; after the rest students at the school were sent home after classes were let out at their regular time of around 3 P.M., Lawrence County School officials order additional custodial employees from other schools in the county to to come to the building to help in complete cleansing scrub down of all of Louisa East Elementary.

The large contingent of custodial staff put in extra work at Louisa East Tuesday evening for several hours in the heaving wiping operation.

According to Lawrence County Superintendent Dr. Robbie Fletcher, the mystery rash outbreak started off with two or three students, and it expanded eventually to 20 students,”

Fletcher said the first cases were reported around lunchtime, and more kids kept coming forward with it for the next hour and a half.

Either way Fletcher says their response would be the same: cleaning and sanitizing the building.

“As an added precaution we’re going to change our air filters too,” Fletcher said. “We don’t have any reason to think there’s something airborne, but again just to make sure.”

School officials are requesting parents take the kids affected to the doctor and share what they find out.

“We’re really happy the school took care of this problem promptly and professionally, We feel like it’s safe for our kids to come back tomorrow, In fact, my own child will be here tomorrow,” Dr. Frazier said Tuesday evening.

Superintendent Fletcher stated that even though the rash occurred among students in one section of the building, he assured the entire school was going to be extensively cleaned throughout Tuesday evening and through the early night.

School operations will be as normal on Wednesday, and Lawrence County School officials are keeping their fingers crossed that no further rash outbreaks or any other incidents will happen at Louisa East elementary .

However, if there is another rash outbreak, or any similar problems today or in the days ahead, there will be absolute guarantee that any more mystery rash outbreaks, plus combined with the recent acid spill at Lawrence County High School late last year that led to a major cleanup and a one day closure of the school system; will definitely cause the vast majority of Lawrence County residents who have children attending any of the local schools, to vehemently squawk like chickens when the fox is in the hen house and bellow like spooked cattle, over the environmental safety, and as well, the general safe-hood and well being of their precious children.

This article contains some opinions of its author.