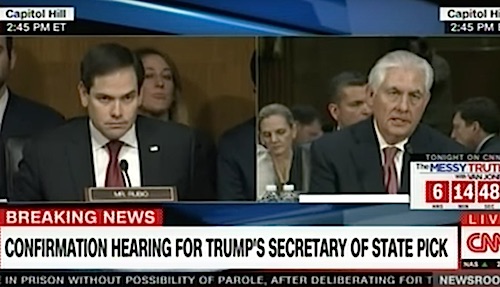 Rubio’s vote – which was in question until earlier today – pushed Tillerson over the top by a single vote with the committee confirming him on party lines, 11-10. All Republicans voted in favor of Tillerson, while the Democrats on the committee opposed him.

Rubio recently expressed visible frustration during Tillerson’s confirmation hearing when the former CEO would not call Russian leader Vladimir Putin a war criminal for his country’s involvement in the Syria and interference in last year’s presidential election.

“Those are very, very serious charges to make, and I would want to have much more information before reaching that conclusion,” Tillerson told a frustrated Rubio.

“What’s happening in Aleppo is in the public domain, the pictures are there,” Rubio shot back. “It should not be hard to say that Vladimir Putin’s military has conducted war crimes in Aleppo.”