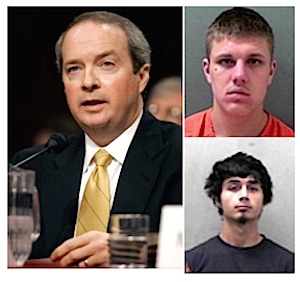 Fitzpatrick, along fellow accomplice, facing life in prison for botched robbery at cemetery that ended in death of man who was visiting and decorating wife’s grave for Memorial day; third suspect charged as accessory after helping one suspect after the crimes took place

A Lawrence County teenager, along with an accomplice from Ohio, have been indicted in the murder of a former coal company executive.

Brandon Lee Fitzpatrick, 19, of Louisa, and Anthony Raheem Arriaga, 21, of Gibsonburg, Ohio, have both been indicted on charges related to first degree murder.

The indictments were handed out by a Mingo County, West Virginia grand jury early last week, that has been considering the case since late June 2016

Ben Hatfield was found shot to death in the Mountain View Memory Gardens Cemetery in Mingo County, West Virginia on May 23, 2016. Mr. Hatfield was the former vice president of Patriot Coal Corporation. (Hatfield’s twin brother, Denny and his wife, Patricia own an antique gift shop in Louisa).

Mingo County Sheriff James Smith said Hatfield was visiting his wife’s grave and also her parents’ graves and decorating them for Memorial Day, as he had done for the past seven years.

According to the Mingo County Sheriff’s Office report that was released provided details in the murder of former coal executive Ben Hatfield.
Hatfield was found shot to death in the Mountain View Memory Gardens Cemetery in Maher area of Mingo County early Monday morning, May 23, 2016. He had been reported missing after not returning to Kanawha County.

Sheriff James Smith stated around 1 p.m. Sunday, May 22, 2016, Hatfield was cleaning his wife and in-laws’ graves when Anthony Arriaga, at the time who was age 20, of Gibsonburg, Ohio, and Brandon Fitzpatrick, who at the time was age 18, of Louisa, Kentucky pulled up to the cemetery.

West Virginia State Police in their report stated Brandon Fitzpatrick and Arriaga were in the Maher area selling drugs and when they ran out of cash they robbed Ben Hatfield before he was killed.

Sheriff Smith reported the men pulled in to the cemetery with intentions of stealing Hatfield’s SUV, so they could get money for it.

Smith said the men did not want to leave any witnesses and that Arriaga walked up behind Hatfield and shot twice at him, hitting him once in the back.

He says Arriaga also went over the riverbank after he panicked, and Fitzpatrick drove off, leaving Arriaga there. Investigators say Fitzpatrick thought Arriaga was going to take Hatfield’s keys and follow him. However neither men stole anything from Hatfield or his vehicle.

Smith says Arriaga dropped the gun in the river, and took off his clothes because they were wet from going over the riverbank.

Sheriff Smith says Arriaga went to a home near the cemetery and asked for a ride to Wayne.

Arriaga was arrested Tuesday May 24, in Allen County, Ohio after investigators were able to ping his cell phone.

Fitzpatrick was picked up Wednesday, May 25, in Eslmere, Kentucky on drug charges after a traffic stop.

Both men have been charged with conspiracy and murder, in what Sheriff Smith is calling a random act of violence. 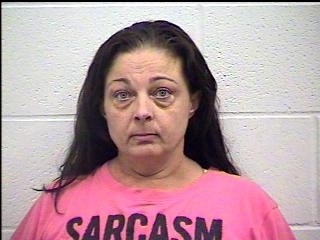 When Fitzpatrick was arrested, investigators say Arriaga’s mother, Angela Marcum, 52, of Delphos, Ohio, was in the vehicle with him. She is facing drug charges, but no charges connected with the murder.

Ricky Peterson, at the time age 20, now 21, of Wayne, West Virginia, was arrested and charged in the case with 3 felonies of OBSTRUCTING, ACCESSORY AFTER THE FACT TO MURDER, and FALSE INFORMATION TO LAW ENFORCEMENT.

Investigators say Arriaga was at Peterson’s home after the murder, but he lied to troopers saying he has made no contact with Arriaga and didn’t know about the murder. Then, Peterson changed his story and told troopers he took Arriaga to his home in Ohio and could give them more details about the murder.

Following his initial arraignment for Ben Hatfield’s murder in Mingo County on May 25, 2016, Anthony Arriaga stated to various media outlets that were assembled at the Mingo County courthouse: “I just want to apologize to the man’s family.”

When asked why he did it, he said, “I don’t want to talk about it.”

No date has been set for any trials regarding the murder case.