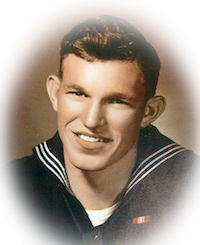 Harold Simpson, 84, of Louisa, KY went home to be with the Lord on Thursday January 19, 2017 surrounded by his loving family.

Harold was born Dec. 18, 1932 at Drift, KY, the son of the late Neal and Ethel Fraley Simpson. In addition to his parents, he is preceded in death by a son James Harold Simpson, brothers Richard, Neal Jr., and James Roger Simpson, and sisters Anna Tipton and Joyce Adams, and also a daughter-in-law Nancy Simpson.

Harold was a retired Chief Petty Officer serving in the United State Navy for twenty years. He also was a member of the Louisa Church of God for 38 years.

Funeral services will be held on Sunday Jan. 22nd at 2:00 pm at the Wilson Funeral Home with Rev. Paul Stepp officiating. Burial will follow in the Jessie Adams Family Cemetery on Route 581 Georges Creek, KY.

Friends may visit the family on Saturday from 5:00 pm to 9:00 pm at the Wilson Funeral Home.

Military Graveside Rites will be conducted by the members of the Veterans of Foreign Wars and American Legion.