KY. WOMAN COMES TO LIFE, CHARGED WITH CRUELTY TO ANIMALS 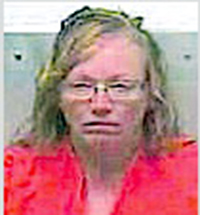 Date: 01-19-2017– After having her charges dropped in court because she was believed to be dead, Jane Embry of Magnolia now has more than 100 cruelty to animal charges reinstated.

As a result of the confusion, Embry’s case was reviewed earlier this month in LaRue District Court. She was in court that morning while other cases were being reviewed, but she was not present when her case was heard. Embry’s lawyer, Robert Fredrick Smith of Louisville, also was not present in court.

County Attorney Kyle Williamson made a motion to reinstate all the charges against Embry. He said he also had a voicemail from Smith saying he could not attend court that day, but he agreed with reinstating the charges and with scheduling a trial date as long as it was a date Embry had time to recuperate from her illnesses.

Reed granted the motion to reinstate the charges and set a pretrial date for 8:30 a.m. Feb. 1.

Embry is charged with 102 counts of second-degree cruelty to animals and one count of harboring a vicious animal. She was scheduled to appear for trial Dec. 7 and the charges were dismissed after she was believed to have died.

The charges stem from Dec. 8, 2015, when officials rescued 102 animals at her residence. According to the arrest citation, 13 animals were euthanized on site because of illness and aggressiveness. Several other cats also were found dead in a freezer inside the home.

After learning the information provided to the court was not accurate and that Embry was a patient at Hardin Memorial Hospital in Elizabethtown. District Judge C. Derek Reed said the charges against Embry are not dismissed and a trial at a later date in Elizabethtown that is convenient for all the attorneys, witnesses and others who are involved. He said it also will be at a date when Embry can be present and has had time to “recuperate.”

HMH officials confirmed Dec. 13, 2016, that Embry is no longer a patient at the hospital.

SHEPHERD INVITED TO SPRING TRAINING WITH THE RED SOX