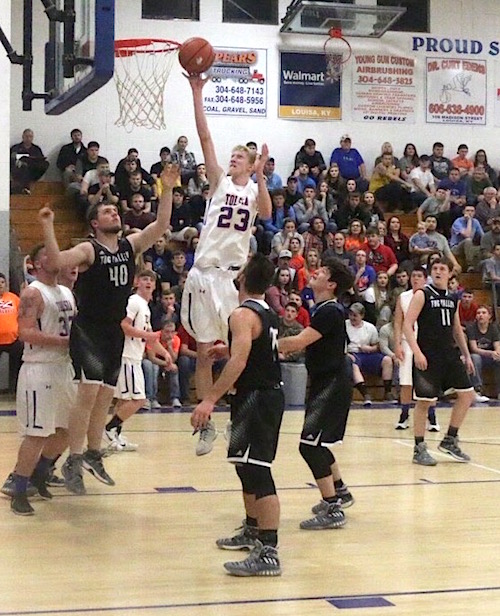 Fort Gay, W. Va. — For the first time in sixteen years Tug Valley ( 6-4 ) and Tolsia ( 3-5 ) renewed their basketball rivalry at Rebel Arena and it was the Panthers coming away with a 73-55 victory on Tuesday night.

Tug Valley started the game knocking down shot after shot and when the Panthers missed they usually grabbed the rebound and put it in. TV held a 17-6 advantage after one period and a 38-19 lead at halftime.

In the second half the Rebels played right with the Panthers outscoring them 36-34 but dug a hole they couldn’t get out of in the beginning of the contest. 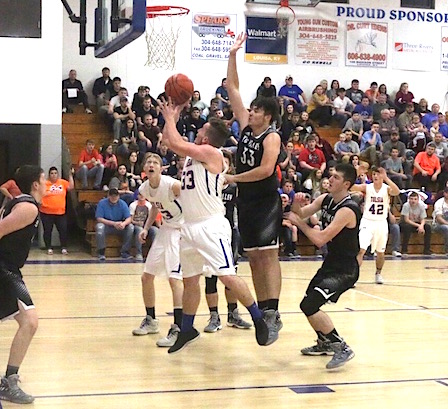 Tolsia had three players hit double figures on the night. Coty Jude had 24 to lead the way, Jordan Johnson tallied 14 points, Brian Campbell came off the bench to score 11 points. Jacob Mollette and Jared Switzer had 3 points each. The Rebels went 10-13 from the line and hit 3 three pointers.

Tug Valley placed all five starters in double figures, leading the was Jonathan Blankenship with 16 points, Levi Davis tallied 14, Tyler May chipped in with 11, Garrett Brown and Colby Savage had 10 apiece.

Both teams will return to action this weekend in the Hatfield/McCoy shootout at the Williamson field house. Tolsia will play Wesley Christian ( Ky ) at 5:00 on Friday and East Ridge ( Ky ) at 1:30 on Saturday. Tug Valley will play Friday night at 9:30 vs Christian Co. ( Ky ) and Saturday at 7:30 vs Poca.

“… Rebounding was the key they really killed us on the boards and got a bunch of second chance points. I really was proud of the second half effort we really competed and played hard.” We will get back to work in practice and get better each day.”