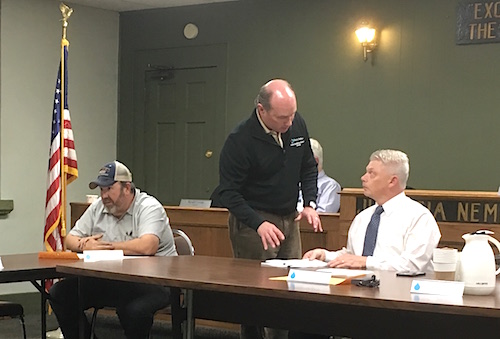 LOUISA, Ky. — The Louisa Utility Board met for its regular meeting on Tuesday, January 17, 2017. Those in attendance were Mayor Harold Slone, Board members Sam Lester, Jeff Kinser, and Steve Lycans, Eldred Adams City Attorney. Those absent were Heath Preston, and Mitch Castle.

After the opening pledge and prayer, the meeting was called to order by the Mayor. Due to the length of the meeting, audience comments were addressed first.

Concerned citizens Elaine Hanshaw and Jenny Foster brought their water bills from the last several months for the Board to review. There bills have doubled as well as their consumption of water.

Mrs. Hanshaw stated her water usage had gone from 2500 to 3000 gallons to 5600 gallons with no changes in the number of her household. Both citizens live on Hwy 3 South ( the Point Section) and live close to each other.

There were several options open to the Board. They chose to read the meter at its next scheduled time, replace the meter and monitor for 2 months the usage.

Both residents have taken video and pictures of the meter at different times during the month. They asserted that the meters possible were not being read properly.

“These were both radio reads,” Mayor Slone said. “This means the reader just drives up to the meter and a computer reads the meter.”

Many ideas were bantered about how this could occur. Mrs. Hanshaw stated,

” I have had the meter man and other people look to assure there is no leak.” The video showed that the meter did not run unless water was used. Mrs. Hanshaw and Mrs. Foster seemed willing to work with the city and did not appear to be frequent complainers.

Motion made by Steve Lycans, second by Sam Lester to approve the minutes and the financial report. All were in agreement.

The Performance Group again presented a proposal to the City and the Board a plan to reduce and save on the City’s electric bill. The Mayor said, “the city’s electric bill for the last month was $37,000.” Matt Callahan of the group, along with several other engineers discussed the project in detail along with the funding aspect of the project.

Motion made by Jeff Kinser, second by Sam Lester to adjourn for executive session to discuss a personnel matter.

The meeting was adjourned.