U.S. Sen. Rand Paul suggests that if Kentucky wants to keep its Medicaid expansion, it should raise taxes to pay for it 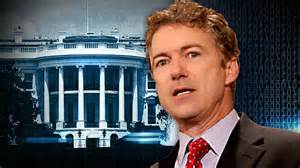 U.S. Sen. Rand Paul suggested Sunday that Kentucky and other states that expanded Medicaid under federal health reform should have to raise taxes to keep it expanded and not rely on the federal government to continue the benefit.

Paul appeared on CNN’s “State of the Union” to discuss his plan for replacing the law, which he said should be replaced the same day it is repealed. “Paul’s plan did not directly address the future of states that signed on for expanded Medicaid offered as part of Obamacare,” Gregory Kreig reports for CNN.

“That’s the big question,” Paul told host Jake Tapper. “And I don’t think that’s going to be in the replacement aspect.”

Paul said the Obama administration misled the public about the federal government’s ability to pay for the expansion, “So I’d say that if you want to have more Medicaid you should say we’re going to have to have higher taxes to pay for it.”

Those taxes could be considerable. Under the law, federal funds covered all the expansion cost through 2016. States are now paying 5 percent, and the law calls for that will rise in annual steps to its limit of 10 percent in 2020. Kentucky’s share for 2017 and the first half of 2018 is estimated at $257 million.

The expansion covers people in households with incomes up to 138 percent of the federal poverty level (about $33,000 a year for a family of four). It added about 44,000 Kentuckians to the program and was largely responsible for cutting by more than half the percentage of Kentuckians without health insurance.

A spokesman for Senate Majority Leader Mitch McConnell, Kentucky’s other senator, asked to reveal McConnell’s plans for the Medicaid expansion, said in an email, “Sen. McConnell will have lots more to say about this issue in the coming weeks.”

Paul said his replacement plan would allow health-insurance companies to offer cheaper plans with less coverage. “We’re going to legalize the sale of inexpensive insurance,” he said. “That means getting rid of the Obamacare mandates on what you can buy. We are going to help people save through health savings accounts, as well as a tax credit.”

“Under Paul’s program, the bargaining power created by the state and federal exchanges would be replaced with a provision that allows individuals and associations like small businesses to create their own markets,” Kreig reports. “He added that those negotiations with insurance companies could also be used to guarantee the availability of policies that “can’t cancel you and guarantees the issue of the insurance even if you get sick.”

However, Paul is just one senator, and President-elect Donald Trump says he has his own plan. “Republicans have been at loggerheads over the timing and execution of their promise to repeal Obamacare and replace it with a cheaper alternative that will not disrupt the insurance market and leave millions of Americans without coverage,” Kreig notes.