LAWRENCE AMONG 25 WITH SYRINGE EXCHANGE PROGRAMS

MONDAY, JANUARY 16, 2017 — Small, rural counties are leading the way in establishing syringe exchanges to prevent outbreaks of HIV and hepatitis C among intravenous drug users in Kentucky, according to a top state drug official.

Van Ingram, executive director of the Kentucky Office of Drug Control Policy, spoke with Mary Meehan of Ohio Valley ReSource, a regional journalism collaborative of public broadcasters in Kentucky, Ohio and West Virginia. He cited Powell County, in the Appalachian foothills east of Lexington, as an example of rural counties that are changing the perception of how addiction is perceived in the state, shifting the focus toward treatment and public health initiatives and away from the criminal justice system. 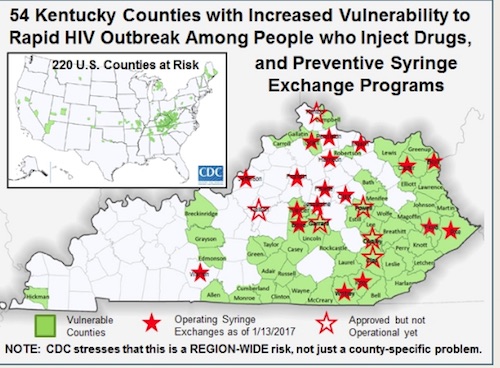 So far, syringe exchanges have been approved in 25 of the state’s 120 counties; several others are having debates like the one that went on in Powell County, population 13,000, reports Melissa Patrick of Kentucky Health News.

In nearby and much larger Madison County, the Board of Health supports a syringe exchange, but was met with “mixed feelings” about the program at a county Fiscal Court meeting, with some members concerned that the program condoned IV drug use, Ricki Barker reports for The Richmond Register. The county will host several forums to educate local citizens about the cost and benefits of the program and answer any questions that the public may have about it. Health officials told Barker that the department sees about eight to 10 patients a day with hepatitis C.

In Powell County, physician assistant Troy Brooks initially opposed a syringe exchange. “He said it seemed like a way to let addicts keep using their drug of choice without consequence,” Meehan reports. But then local police showed him how bad the problems is by taking him to the playground in Clay City, where they collected 41 dirty needles, and he saw the need to protect children and first responders.

Six of the 25 syringe exchanges approved so far aren’t operational yet. Thirteen are in counties deemed most vulnerable counties by the federal Centers for Disease Control, which identified 54 Kentucky counties as among the 220 most vulnerable in the nation to a rapid spread of HIV and hepatitis C infection among IV drug users.