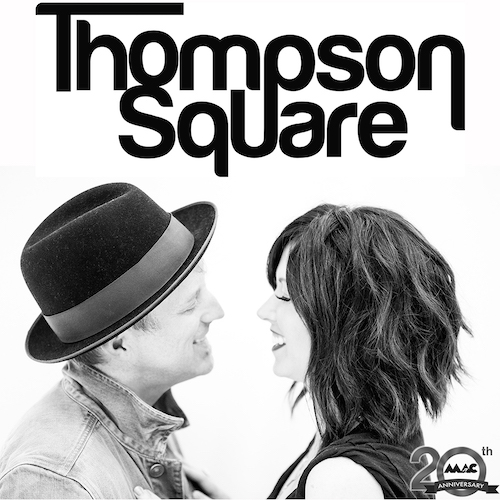 Prestonsburg, Ky. – The duo of Keifer and Shawna Thompson, known to country music fans as Thompson Square, will be hitting the Mountain Arts Center (MAC) stage on Friday, January 27th. Internationally known Thompson Square has topped radio charts across the world with No. 1 hits “Are You Gonna Kiss Me Or Not,” “If I Didn’t Have You,” and “Everything I Shouldn’t Be Thinking About.”

Thompson Square’s awards include Vocal Duo of The Year for both the ACM (Academy of Country Music) and CMA (Country Music Association) for 2012. They won the award again in 2013 with the ACM. The duo have also won various awards for Single and Video of the year. They supported such acts as Jason Aldean in 2011 and Lady Antebellum and and Darius Rucker in 2012.

After taking its headlining “Just Feels Good Tour” across the United States, Asia and Australia in 2014, Thompson Square took time off to collaborate in the studio with both Dann Huff and celebrated producer Mickey Jack Cones (Dustin Lynch/ Joe Nichols) to work on the Stoney Creek Records duo’s upcoming third album.

In 2016, the couple welcomed their first baby, and released their latest single, “You Make It Look So Good.”

MAC Executive Director Clayton Case said the center is excited to bring such a high caliber act to eastern Kentucky.

“We could not be happier to bring such an amazing act to the MAC stage. When we had the opportunity to book them, we couldn’t pass it up,” he said. “Thompson Square has some of the most popular radio hits of the last 5-7 years.”

The opening act for the evening will be Nashville-based Triple Run. The band includes Knott County native and former Kentucky Opry Jr. Pro Brittany Taylor Howard. They opened for Sundy Best last fall, and just recently wrapped up a tour throughout the western United States.

This weekend’s show will be Friday, January 27 at 7:30 p.m. at the Mountain Arts Center in Prestonsburg, Ky. Tickets are $29 and can purchased online at www.macarts.com or by phone at 1 (888) MAC ARTS.

The Mountain Arts Center is the premier performing arts venue in eastern Kentucky. Located in the heart of the bloodline of the Country Music Highway, the facility features a 1,050-seat auditorium, conference/meeting facilities, instruction rooms and a state-of-the-art recording studio. Operations are through a partnership between Prestonsburg, Ky. and Big Sandy Community & Technical College. For more information, call 1-888-MAC-ARTS or visit macarts.com.