NO QUORUM FOR CITY MEETING: “State of the City Report”

The Louisa City Council was supposed to have a regular scheduled meeting Tuesday night but due to sickness there was no quorum. Those in attendance were Mitch Castle, David McKenzie and Tom Parsons. Those absent were Ron Cordle, Lisa Schaeffer and John Nolan.

The Mayor of Louisa Harold Slone did deliver his scheduled “State of the City Report” anyway.  The next meeting was scheduled for Tuesday January 24, 2017 at 7pm. 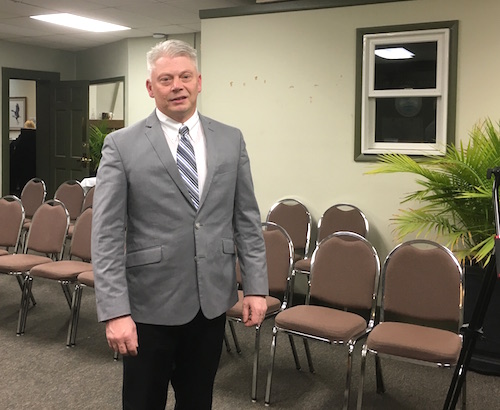 Once again it is an honor to stand before you as your Mayor and deliver the state of the city address. I want to personally thank each council member, employee, and citizen who has contributed to our city this past year.

The year 2016 brought many similar challenges but also added many new ones. As you well remember when budget preparation began last year the forecast for coal, mineral severance tax, and road funds was grim to say the least. Unfortunately, I must announce that those actual numbers now look even worse than what the forecast projected. If you remember we ask all departments to scrutinize their budgets and make any and all cuts possible. Not only did they make budget cuts, they have been very disciplined about operating within those budgets with very few exceptions that were non discretionary. I ask department heads to cut all overtime possible and we have made many improvements in that category. With all of the decrease in revenue, I believe we can hold our heads high that we are primarily financially sound and operating within our budget.

Now Lets outline some ‘success’. Once again, in January, the city faced, as far as I can tell, the biggest snowfall in several decades and I can proudly say we were far more adequately equipped to battle the storm than ever before. The street , sanitation, and utility workers swung shifts non stop for 72 hours battling the historic storm. Once the storm was over the city was able to bounce back much quicker than even the smaller storms the years before. As winter arrived this year the maintenance staff had all equipment repaired, maintained and tested before the first snow fell. The response to the first snowfall I feel was an overwhelming indicator of our success and attest to the vast improvements our city has made in two years.

We were able to focus on a targeted area of the city known as “berg” subdivision and address many of the drainage issues that was causing flooding problems to residents in that neighborhood. Most all this work was done in-house, keeping construction cost as low as possible. Louisa put down over $120,000 dollars of asphalt, bringing the totals of this administration to a quarter million dollars of road improvements. The State’s KY 32 and Commerce Drive projects are coming to an end, leaving two basically new streets in the city. Garden Avenue and Highland Heights were repaved in a cooperation agreement with the county, which provided half of the cost. I believe roads and sidewalks still need to be a priority for the city and pledge to continue these projects as funds allow us.

As the branding of ReDiscover Louisa continues, I believe making it a better place to live is important. Our citizens want to live in a place with facilities and activities for the residents. We continued to improve our park systems by adding new features to Main Street Park and revitalizing more areas of Lockview Park. We upgraded the park shelters this year with ceilings , new paint and electricity. A set of unsafe baby swings was replaced with new ones, with costs shared with AEP and Louisa Rotary. The basketball court was completely renovated with ARC grant funds and lends itself to what I believe one of the nicest public outdoor courts in the tri- state. It blesses me to see our youth using the court on a daily basis. The Louisa Hoops for Hope tournament began this year bringing more than 100 participants to Louisa and bringing additional awareness to drug addictions that continue to plague our region. The Nightmare on the Square, Christmas Parade, and Lycom Summer Fun Series all proved to be very successful, with record attendance this year. A life size nativity set was sponsored by Lawrence County Tourism and the Ministerial Association and placed at Main Street part for viewing this holiday season. Street side planters stood vibrant and lined the sidewalks on Main Cross St. A new partnership formed with the local garden club and beautification committee will bring even more highlights to the city in 2017.

A $500,000 grant to begin phase 1 of the riverwalk is still pending with the state and we expect to hear of those results any day. Should we be successful with this grant Preliminary engineering work could possibly begin this spring. Should we not be successful there are some grant opportunities opening up soon which we will also apply. A new grant application was recently submitted to ARC for a viewing observation deck at LockView park which will provide a scenic overlook of the Locks as well as install an informational kiosk about the history of the river.

Operating within budget our sanitation department removed 3,000 tons of trash, but unfortunately finds itself facing new challenges of increase landfill cost and a truck that is in bad need of replacement.

In the Year 2016 the Louisa Police Department focused more on community policing as they implemented the 1st annual Louisa Police Bicycle Safety Rodeo. During the spring they visited the local elementary schools teaching kids the “Eddie Eagle” Gun Safety program which was presented to approximately 600 students of Lawrence County schools. Part of their efforts included teaching all the Lawrence County School Bus drivers on how to recognize bullying and how to handle an incident.

Other events included talking to several groups such as the local Cub Scout Troop about what it is like being a police officer. The police department also continued their “Building Check” program, where officers physically check the doors of local business to ensure they are secured. The newly formed Louisa Public Utilities Board is now up and running and is tackling many of the much need problems that continue to face our declining water and sewer infrastructure, including a downtown sewer rehab project and potentially installing new water meters city wide.

The financial condition on the utilities has improved and continues to improve.

One of the biggest responsibilities of the Water Dept. is providing clean, safe drinking water to our residents. The quality of our water department was recognized when they were made the proud recipients of the Wooden Bucket Award from Ky Rural Water Association.

The Wooden Bucket Award is presented to a water and/or wastewater utility that has made substantial and lasting improvements in providing high levels of customer service and high quality drinking water and wastewater services in its community, including having shown exceptional efforts in meeting the needs of their communities, enhancing their operations, and complying with regulatory requirements.

Our fire department responded to 233 calls for help last year and hosted largest and most successful fire school in the region with over 300 students. They continued fire prevention week and hosted over 1200 children about fire safety.

As we kick off 2017 our employees will do so with a new look. The city has purchased uniforms for all city employees allowing us to break free from a rental contract and saving the city money overall.

I don’t believe any State of the City address would be realistic if it did not point out our weakness’s and shortcomings as well as our accomplishments. Our downtown revitalization in the private sector has not transpired as quickly as many of us had hoped when we started our term in office. Blighted properties and empty buildings continue to be a stumbling block. While these situations are often not comfortable to deal with I think we all realize they are necessary. A review of guidelines and the ordinances along with additional education of the code enforcement officer, and appointment of a board or committee needs to be part of future plans. While we have pursued two vacant properties and created a situation of forced sale we know this process has been very slow and pain staking.

It is my goal and I hope it will be yours this coming year to inject ourselves into the community and encourage a sense of revitalization. Whether it be attracting new small business or improving ones we have. We are all part of this community , a family, a “Team Louisa”, if you will, and its gonna take collaboration, communication, and cooperation to get everyone on the same page concerning these matters. I believe council can play a big role.

Folks, let me finish by saying I am very thankful and blessed to be your Mayor. I say that because I get to be the mouth piece (and Lord knows I like to talk). But seriously, people come up to me on a daily basis and say positive things about the city. They will say, “Mayor you’re doing this or that”.. and at that point I realize I’m just blessed to be the spokesperson…. I get to both listen and speak to those people on your behalf but this city is not me… Or you frankly… Or the police or fire, etc.. its about us… The fist council meeting I said we need to become a Team of Teams, With one goal, Improve the quality of life for our citizens and I believe we keep getting closer to reaching that goal everyday.. Thank you all, may God bless you and our little city we call home.

Middle Dawgs take 2 of 3 from Rams