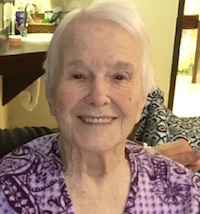 Lucille Bailey-Rice, 95 of Ashland passed away on Wednesday, January 11, 2017 at the Boyd Nursing and Rehabilitation Center in Ashland.

Emma was born on December 13, 1921 in Chapman, Kentucky to the late Robert Lee and Virginia Mae Carter-Bailey. She worked for nearly 30 years as a nurse at the Louisa General Hospital, Humana Hospital and as it is known now Three Rivers Medical Center and attended the Louisa Freewill Baptist Church in Louisa and the Moore Street Tabernacle in Ashland. In addition to her parents she was preceded in death by one grandson, Herbert Hoosier; a son-in-law Ronnie Hoosier as well as nine brothers and one sister.

Left behind to cherish her loving memory is two daughters, Rita (Raymond) Mecca of Ashland and Judith Hoosier of Prichard W.Va; eight grandchildren Missy (Tom) Derifield-Gillespie of Aurora, IL, Phillip Derifield of Lexington, KY, Angela (Owen) Daniels of Houston, TX, Nick Mecca of Ashland, Nina Mecca of Cincinnati, OH, Mark (Allison) of Beckley, WV and Adam (Brynna) Hoosier of Fort Gay, WV; one granddaughter-in-law Samantha Hoosier of Fort Gay; 12 great grandchildren as well as many friends whose lives were all touched in some form during her 95 years.

Funeral Services will be held at 2 pm of Saturday, January 14, 2017 at the Young Funeral Home Chapel, burial will follow at the Bailey Cemetery in Chapman.

Visitation for family and friends will be held on Friday, January 13, 2017 from 6-8 pm at the Young Funeral Home Chapel.

Online condolences may be left for the family by visiting www.youngfuneralhomeinc.com