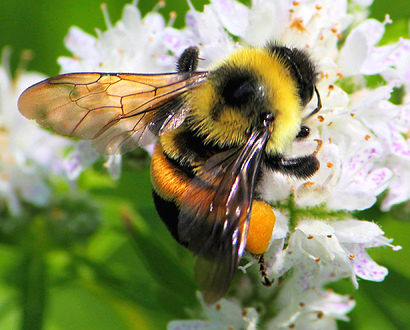 WEDNESDAY, JANUARY 11, 2017 — The U.S. Fish and Wildlife Service has named the rusty patched bumble bee an endangered species. Much of the natural habitat of the bees, grasslands and tallgrass prairies in the Upper Midwest and Northeast, “have been lost, degraded, or fragmented by conversion to other uses,” states the agency. Increased use of pesticides, parasites and disease also suggest why the species has lost 87 percent of its population in the past 20 years and is now found in 13 states and Ontario, Canada, after having been found in 28 states.

Agri-Pulse reports, “FWS said that while it is ‘difficult to pinpoint exactly when the species’ decline began, data show that the bee’s ‘precipitous declines’ became apparent around 1995 and continued into the early 2000s, a period that ‘coincides with increased neonicotinoid use.'”

Bayer CropScience and CropLife America said “the decline began before neonics began to be widely used and that bees are, in fact, able to coexist with corn and soybeans,” reports Agri-Pulse. “Bayer, for example, said that FWS did not consider field studies that ‘have found no adverse effects when bees are placed near treated crops and allowed to forage naturally.’ FWS acknowledged ‘that there are studies that did not find adverse effects, but that ‘the totality of data … suggests some insecticides kill bumble bees and others cause sublethal effects.'” Agri-Pulse is subscription only, but can be viewed by clicking here.