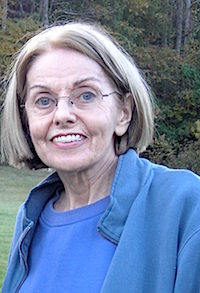 Margaret Ann Graham Bell passed away peacefully, January 3rd, 2017. She was 83 years old. She and her husband lived in Raleigh, NC, for the past 30 years.

Ann was born July 7th, 1934, in Cherokee, KY, daughter of Lem and Elizabeth Graham. She attended grade school in Cherokee and graduated from Blaine High School.

On her first day in college, she met her future husband, John Paul Bell. They were married August 29th, 1954. Before she graduated from college, she started teaching in the one-room Needmore School House. In 1959, Ann graduated from Westhampton College, University of Richmond, Virginia. She took art classes, taught school, and started studying for her Master’s degree in Education. In 1962, she gave birth to their daughter, Elizabeth.

By the mid-1970’s, John and Ann had moved to Raleigh, NC. Ann taught school while studying for her Master’s. Ann always subscribed to Architectural Digest and had interests in decorating and in investing, so she also took some real estate sales classes and discovered that she had a knack for real estate. She earned her Broker’s license and opened her own office. She took care of her parents in their final years, bred sweet-tempered show cats, collected art and antiques, and managed the family business with her husband in Raleigh. She was also a breast cancer survivor.

In 2014, Ann was diagnosed with Alzheimer’s Disease. Her husband took care of her at home until she needed the freedom and safety of a controlled environment. Since late autumn of 2015, Ann resided at Falls River Court Memory Care, in Raleigh. She enjoyed her life there, watching all the busyness. Her final months were made comfortable by the attentive and thoughtful Hospice Transitions care-givers. Ann died in her sleep of respiratory complications of Alzheimer’s Disease.

Ann is survived by her husband, John Paul Bell and her only child, Elizabeth. Her grandson, John Paul Garner, lives in NM. Her granddaughter, Laura, lives in Raleigh. Ann had one great-grandson, Graham, aged 2 and named for her. She will be missed and always remembered for her intelligence, kindness, hard work, brilliant blue eyes and thousand-watt smile.