Tolsia loses at home to number one Mingo Central

Fort Gay, W. Va. — Undefeated and number one ranked in Double A Mingo Central ( 6-0 ) ran past Tolsia ( 2-3 ) at Rebel Arena 76-52 on Wednesday night in boys basketball action. Marshall verbal commit Jeremy Dillon of Mingo Central had a near trIple double in the win.

The Rebels played the Miners close until the final minute of the first period as MC closed with a 26-17 lead. In the second quarter Tolsia had the momentum and closed within 37-27 before Mingo Central went on a 8-0 run to lead 45-27 at the half. 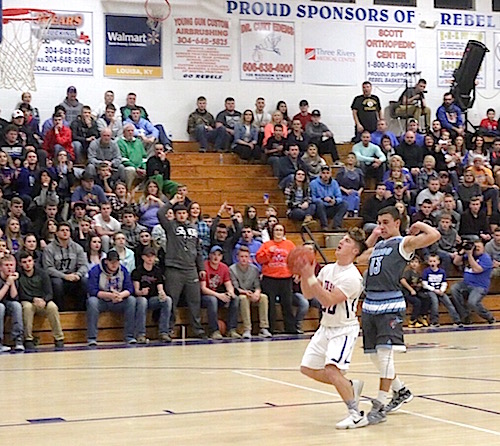 In the second half Mingo Central kept the Rebels at bay and wouldn’t let the lead get under 10 points even though Tolsia battled to the end.

Brian Campbell came off the bench to score 14 points to lead the Rebels, Jordan Johnson tallied 12 points, Coty Jude who was under the weather scored 9 points, Logan Presley chipped in with 7 points, Jared Switzer and Jacob Mollette had 5 points each. Tolsia went 4-6 from the line and hit 8 three’s in the loss.

Tolsia will be back in action on Friday night when they travel to Ambassador Christian.

“… Tough night for us, we played hard but we didn’t execute. Playing a good team like Mingo Central it takes effort and execution in order to pull off the upset.”

“Give credit to coach Hatfield and those guys. They’re a good team. We have to move forward and get back on the winning track against Ambassador Christian.”