Lawrence Co. Fiscal Court Special Meeting is a dud, no decision made 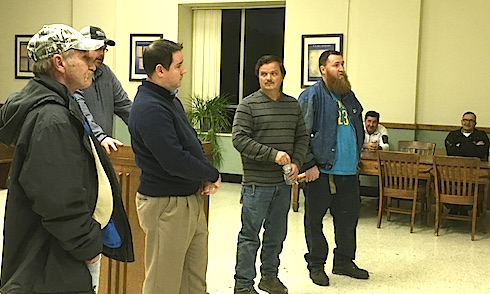 After the pledge and opening prayer, the meeting was called to order.
Motion made by John Lemaster, second by Earl Boggs to appoint Catrina Vargo to the Southeast Kentucky Mountain Trail Coalition Committee. Ms. Vargo works on economic development part time for Lawrence County.

The Big Run Landfill has raised the dumping fees for all garbage haulers but there was some concern expressed that different haulers were experiencing several different rates based on tonnage.

A representative from Endicott Sanitation stated, “My rates are going up about $8.00 per ton.”

Lawrence Co. Judge/Executive John Osborn said one of the haulers was not in favor of raising the rates.

“Dennis Marcum is not for a raise at this time due to his customers having difficulty paying the current rates,” Osborne quoted Marcum as saying.

After a discussion among the court members it was decided that they would talk to the Big Run Landfill before making a decision on a rate increase.

The purpose of the conversation is to inquire about the differences in the haulers rates.

A motion was made by John J. Lemaster and second by Earl Boggs to table the discussion. The topic will be discussed at the next regular meeting of the fiscal court.

The meeting was then adjourned