Bevin declares 2017 the ‘Year of the Bible’ in Kentucky 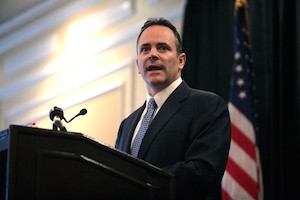 FRANKFORT – The “Year of the Bible” will apparently last 24 months in Kentucky.

Both proclamations pleased Pastor Mark Harrell of Victory Christian Fellowship church in Somerset, who said Wednesday that Bevin’s actions are in support of a statewide Bible reading marathon.

The “Kentucky 120 United Bible Reading Marathon” is a statewide event to get people in all 120 Kentucky counties to read aloud the entire Bible in the first three or so days of the new year.

Harrell founded the effort with aid from a group of clergy known as the Kentucky Prayer Focus.

“We had the Bible-reading marathon last January and the governor and his family participated,” Harrell said. “He wanted it again. We are fortunate to have such a governor.”

Harrell said he and Democratic state Rep. Tom Riner of Louisville, who also is a Baptist minister, asked Bevin to sign the proclamation for 2017 and “he graciously accepted as he did last year.”

The governor’s proclamation, which he signed Dec. 19, says 2017 “marks the second year Kentucky has led the nation in celebrating the Bible’s significant impact on Kentucky and American institutions and culture by leaders in each county taking shifts to read through the entire Bible in Kentucky’s Bible Reading Marathon beginning Jan. 1, 2017.”

“We’re trying to get all people in one accord in God’s Word,” said Harrell.

He said readers in the marathon will include government officials, students and jail inmates, among others.

So far, people in 72 Kentucky counties have indicated they will participate, said Harrell. “Last January, we had 90 counties but more time to prepare for it.”

Harrell said he initially was not planning to hold the marathon in back-to-back years, but Bevin requested it again.

Frank Lovell Jr., a board member of Louisville Atheists and Freethinkers, said he is “disappointed but not surprised” by Bevin’s actions.

“He can believe whatever he wants to but I just don’t think an agent of the government should be signing such a proclamation,” said Lovell.

Anyone interested in participating, Harrell said, can call his church at 606-677-1100 to get more information.