Crews have begun working to construct a new bridge over Burning Fork on the west end of this 2.4 mile section but are temporarily halting work during the holidays, beginning Dec. 23. Work will resume Jan. 9.

When crews return in 2017, they will also start working on a couple of box culverts – one for an access road on the north side of the project that supports access to local businesses and another on the east end of this section.

Neither the bridge nor culvert work is expected to affect traffic.

Crews relocating utilities along the project will continue to work through the rest of the year but will not work December 23-26 or January 2, in recognition of the Christmas and New Year holidays.

In 2017, residents and motorists can expect the utility relocation to continue in preparation for increased construction activity. Work currently is concentrated around the east end of Restaurant Row but will extend to the western end of the project segment next year.

The Restaurant Row project will improve safety and mobility through the busiest and most visible stretch of roadway along the Mountain Parkway corridor, which currently ends just west of Salyersville. The Restaurant Row area begins just east the KY 7 interchange (Exit 75) of the current Mountain Parkway to just east of the KY 114/U.S. 460 intersection (Rock House Road).

Construction, which is supported by a $24 million federal TIGER grant, will last about three years as contractors widen the main road through Restaurant Row to four lanes and expand a system of access roads to support businesses along the corridor. 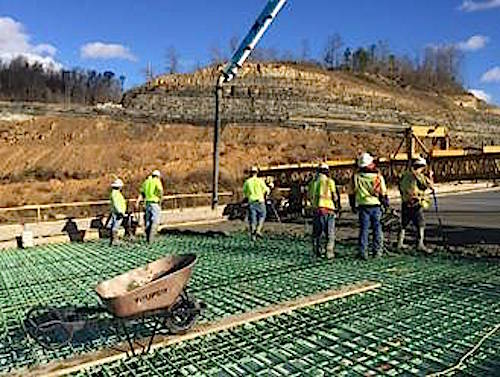 While the Gifford Road interchange is substantially completed, significant work continues around the KY 7 and KY 30 interchanges. Crews are continuing to build bridges in these areas of the project. Travelers should expect brief periodic delays as beams are set on a KY 30 bridge Dec. 27-28.

Grade work for these interchanges has been suspended until spring.

The speed limit in the area has been reduced, and traffic on the parkway may be slowed or stopped periodically for the safety of workers and travelers.

About the Mountain Parkway Expansion

The Mountain Parkway Expansion is a 46-mile transportation improvement project that will create a wider, safer connection between Eastern Kentucky and the rest of the Commonwealth.

The project will widen 30 miles of the existing parkway from two lanes to four lanes, and will extend the parkway another 16 miles between Salyersville and Prestonsburg.

For more information on the Mountain Parkway Expansion, visit www.MtnParkway.com or follow the project on Twitter (@MtnParkway) or on Facebook (www.facebook.com/mtnparkway). A project office is open in Magoffin Plaza in Salyersville; call (606) 349-8160 for hours.