When Tom FitzGerald calls something “the most reckless regulatory program I have seen proposed in my 36 years of practicing environmental law,” that’s a superlative that should set off alarms. 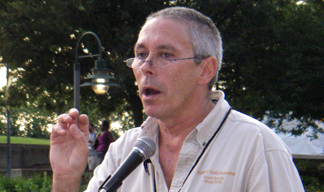 FitzGerald, director of the Kentucky Resources Council, was referring to a proposal from the Bevin administration that would exclude the public from even being notified when electrical utilities are planning to build or modify disposal sites for the tons of waste generated by coal-fired power plants.

Under the proposed rule, utilities could begin building or modifying landfills or waste-holding impoundments without any review by the state environmental agency of the design, siting, operation or plans for future monitoring. And the public would have no way of raising concerns or commenting.

This approach would upend decades of environmental and public protections. It also conflicts with Kentucky’s own waste-management laws.

The potential for catastrophic pollution is real, as the people of Kingston, Tenn. discovered around this time eight years ago when a dike failed on a Tennessee Valley Authority coal-ash impoundment, dumping more than a billion gallons of sludge on the neighbors and into the Clinch River, requiring a $1 billion cleanup.

But the pollutants in power-plant leftovers — including toxins lead, arsenic and cadmium — can also slowly contaminate groundwater and streams through leaks and leaching.

Coal ash can pollute the air, as neighbors of LG&E’s Cane Run power plant in Louisville know too well. “Blowing ash and odors plagued a nearby residential neighborhood for years, prompting repeated fines by the Louisville Metro Air Pollution Control District,” reports The Courier-Journal’s James Bruggers. That landfill is being closed after the utility replaced the coal plant with one fueled by natural gas.

The Environmental Protection Agency has never classified coal-combustion waste as hazardous in part because it’s produced in such huge volumes. That is an argument for more oversight not, as the Cabinet for Energy and Environment is proposing, less oversight.

The EPA last year approved more stringent standards for disposing of coal combustion waste, but nothing in the new federal rule compels states to gut processes that allow potential problems and risks to be identified and remedied before permits are issued and utilities begin construction.

The proposed regulation appears to relieve utilities of responsibility for posting bonds to pay for cleaning up future problems or closure costs, even for existing landfills or impoundments, which means that in practical terms the risks would probably end up borne by the public and local communities.

As FitzGerald points out, the only recourse when the new standards are violated would be lawsuits by the state and public after problems have arisen and been documented. Then, the cost of fixing the problems would be passed on to Kentucky consumers in the form of higher electricity rates.

The cabinet is now taking public comments on this reckless plan, which obviously needs to be reconsidered. Send comments to water@ky.gov or dep.ky.gov or mail them to Energy & Environment Cabinet, 400 Sower Blvd., Frankfort, Ky. 40601.