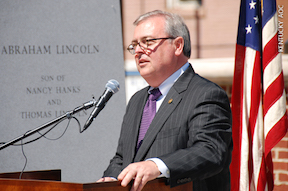 Note to Media: Chief Justice Minton will host a conference call to discuss the Judicial Redistricting Plan today, Dec. 20, at 2 p.m. EST. To participate, please call the number below and use the access code provided. There will be a brief pause while your access code is being verified and then you will be asked to state your name.

Please note that judicial redistricting affects only Circuit Court and District Court, which are the trial courts. It does not affect the Supreme Court and Court of Appeals, which are the appellate courts.

FRANKFORT, Ky., Dec. 20, 2016 – Chief Justice of Kentucky John D. Minton Jr. has introduced the first Judicial Redistricting Plan Kentucky has seen in decades. The Kentucky legislature will consider the plan during the 2017regular session of the General Assembly. If passed, the plan will take effect in 2022, when all Circuit Court, Family Court and District Court judges are on the ballot.

“I am pleased to announce that the Judicial Branch has fulfilled its directive from the legislature to produce a plan that will update Kentucky’s circuit and districts to reflect current judicial workloads,” Chief Justice Minton said.

“Changing boundary lines and reallocating resources is never easy, which is why judicial redistricting hasn’t been addressed for so long. The fact that we’re making this announcement today is a major achievement and I appreciate the judges’ support of what is a tremendous milestone for the Kentucky Court of Justice.”

He said it’s important to remember several things when considering the proposed plan. “The first is that we were scrupulous in how we collected and analyzed data on judicial workloads. This process was driven by the data, and we based our decisions on sound research principles and input from stakeholders statewide.

“Second, we recognize there are differing opinions about how to allocate judicial resources and not everyone will agree with the proposed changes. However, the Supreme Court believes this plan will move us beyond the years of inaction and provide a solid start to correcting the pockets of workload imbalances we identified across the state. When timely justice is compromised by unmanageably high caseloads, we must consider that a call to action. Giving all citizens the same access to justice is our standard and this plan will help us fulfill that responsibility.

“And finally,” he said, “the plan will not go into effect until 2022, which gives those affected by the changes significant time to prepare.”

Chief Justice Minton said he looks forward to presenting the Judicial Redistricting Plan to the legislature early next year. “And I want to thank our justices and judges for their patience during this exhaustive and intense process. They deserve credit for tackling a tough job and seeing it through to the end.”

The proposed plan will do the following:

Ø  Move a limited number of counties from one jurisdiction to another.

Ø  Combine circuits and districts that are currently different and reduce the number of circuits by one, from 57 to 56.

Ø  Bring Family Court to all but 10 jurisdictions.

Ø  Reallocate existing resources by moving judges from circuits with lower workloads to areas of greater need.

Ø  Calculate the appropriate number of judges by using a 1.4 implied judicial need as the cutoff to determine where more than one judge is needed.

The judicial circuits and districts have remained largely unchanged since the passage of the Judicial Article, which created Kentucky’s modern court system in 1976. Since that time, Kentucky has seen significant changes in caseload and population.

The Judicial Redistricting Plan has been nearly three years in the making. The process began in 2014 when the General Assembly included language in the Judicial Branch budget bill requiring the Administrative Office of the Courts to complete a judicial workload assessment study as the basis for a redistricting plan. Chief Justice John D. Minton Jr. asked the legislature to include that language as support for an evidence-based approach to redrawing circuit and district boundaries.

Unlike redistricting for legislative boundaries, judicial redistricting cannot be accomplished by making changes based solely on population. The judicial process is more difficult because it impacts commonwealth’s attorneys as well as judges and it is the type of caseload – not population – that ultimately determines the workloads of circuit, family and district judges.

The AOC’s first step was to engage the National Center for State Courts to measure judges’ workloads statewide through what was likely the first Judicial Time Study ever conducted in Kentucky.

For four weeks in the spring of 2015, circuit, family and district judges logged how they spent their time handling cases and taking care of judicial duties outside of court. Despite the burdensome task of recording every minute of every workday for a month, 95 percent of judges participated.

This exercise provided the number of minutes it takes to complete specific tasks at each level of the court system. Using this data, the NCSC compiled a time study report that included case weights and measured workloads for each phase of a case and its jurisdiction. These case weights were then put into a formula to get the implied judicial need for each jurisdiction.

The AOC and NCSC followed up the Judicial Time Study with site visits to circuit, family and district judges in several jurisdictions. The site visits helped identify challenges that judges face in handling different types of cases and variations in trial court work across the state. Smaller “Delphi” groups of circuit, family and district judges also reviewed the data for accuracy. That process took about 18 months and provided the first critical information – weighted caseloads and implied judicial needs.

Conversely, in other areas across the state there are two judges where there is an implied judicial need of fewer than one. The Judicial Redistricting Plan attempts to correct the imbalance in jurisdictions that are significantly under-judged and over-judged.

The data on weighted caseloads and implied judicial needs was evaluated by the Kentucky Judicial Workload Assessment Committee, a group created by Chief Justice Minton to work closely with the NCSC on this project. The JWAC is comprised of judges from all four levels of the court system, circuit court clerks, commonwealth’s attorneys and legislators from throughout the state.

The NCSC compiled the weighted caseload information and implied judicial needs into a report that was vetted by the JWAC members and the Supreme Court. Chief Justice Minton presented the Interim Report of the Kentucky Judicial Workload Assessment to the legislature in February 2016.

The second phase of the project required redrawing circuit and district boundary lines and reallocating judicial resources using the data collected from judges statewide. JWAC members have met three times since May 2016 to discuss and review various redistricting plans. At the committee’s last meeting in October 2016, the members voted on a plan that was then submitted to the Supreme Court of Kentucky. In early December 2016, the Supreme Court justices approved a plan based on the one recommended by the JWAC. Chief Justice Minton announced that plan on Dec. 20, 2016. The Judicial Redistricting Plan will be formally presented to the legislature in early 2017.

About the Supreme Court of Kentucky

The Supreme Court is the state court of last resort and the final interpreter of Kentucky law. Seven justices sit on the Supreme Court and all seven justices rule on appeals that come before the court. The justices are elected from seven appellate districts and serve eight-year terms. A chief justice, chosen for a four-year term by fellow justices, is the administrative head of the state’s court system and is responsible for its operation. The Supreme Court may order a ruling or opinion to be published, which means that the ruling becomes the case law governing all similar cases in the future in Kentucky.