Dr. Fletcher also recognized the Lawrence County High School Kentucky Youth Assembly Delegation, which had several superlative performances. Shane Skeens was named the KYA Attorney General for 2017; Earnest Woods was named an outstanding speaker and authored a bill which passed both the KYA Senate and House of Representatives. Also, LCHS advisor David Prince was recognized as the 2016 Advisor of the Year and inducted into the KYA Hall of Fame. 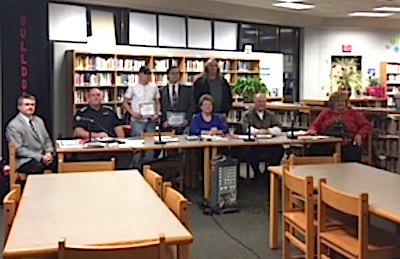 Lastly in the recognition section, Louisa Food City Manager Kevin Garrett presented the annual School Bucks awards to each individual principal and the overall award to the schools in the district was in excess of $5,000. Dr. Fletcher presented Mr. Garrett with a certificate recognizing Food City as a valuable community partner of Lawrence County Schools.

An item of significance in the communication segment of the agenda was the update on the dual credit offerings. Fletcher stated, “Students now have over 30 hours of dual credit courses available at Lawrence County High School and it is a great opportunity to earn college credit while they are still in high school.” 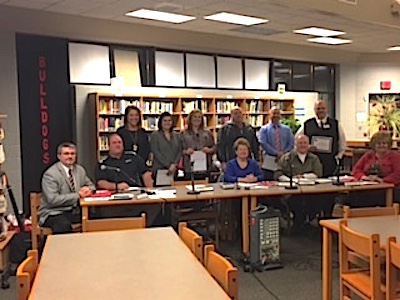 Dr. Cassandra Webb, the chief academic officer, presented the revised 2016-2017 District Improvement Plan to the Board of Education and updated them on the measures in the plan, the research and effort behind them.

“Our resource teachers, Dr. Webb as our point person on this, and students and community partners were a part of this plan and there was a tremendous amount of work put into the plan,”  Dr. Fletcher said.

There also was a lengthy discussion about the community bonding potential and moves that would be necessary in order to secure funding for the building of a new elementary school.

Dr. Fletcher informed the Board and attendees that it would be very unlikely to secure state assistance without the district having a “recallable nickel” tax, which all counties surrounding Lawrence County except Elliott County have in place. Mr. Jim See remarked, “We’re at the point where we really have to do something.” Board Chairman Heath Preston pointed out, “I’ve told every legislator I’ve spoken to that if it was a situation where kids in Lexington had to go to a school that was 63 years old, there’d be a riot in the streets and our kids here deserve as good as any kids anywhere in the state.”

The snow removal bid was awarded to Lawn Express Landscaping, keeping that service the same for the schools as last winter. (Number of bidders nor bids were made available)

Re: Request to the Lawrence County Board of Education for Creation and Changes regarding Positions