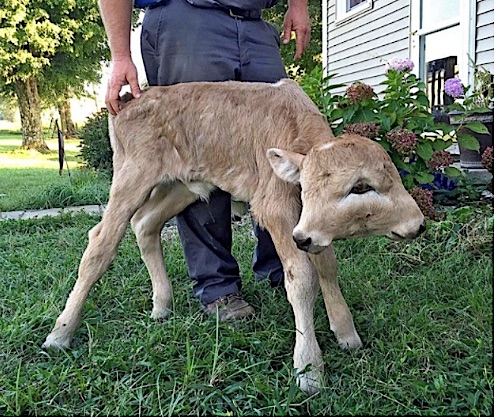 This holiday season, a calf called Lucky will be celebrating with her Taylor County family the gift of being alive.

Lucky is a two-faced calf born on Sept. 16. Most animals like Lucky do not live long, and the McCubbins think the calf may have already set a record.

Lucky was named by the McCubbin’s daughter Kenley, who heard her mom Brandy say the animal was lucky to be alive. Brandy’s husband Stan had initially thought the new calf was twins.

The McCubbins see Lucky as a miracle and blessing. They are determined to give her the best life possible for as long as she can live.

The McCubbins, who have four daughters, even had a holiday photo made with the little calf.

Even though they are cattle farmers, they treat Lucky as a pet. Lucky lives in the basement and gets fed by bottle, until the McCubbins can determine if her cleft palate can be fixed. They are trying to raise $500 for a scan to see if that can be fixed so that Lucky can eat hay.

When Lucky tried to eat hay before, it became stuck in her palates and nostrils.

“Now that we’ve got her in the basement, (the couple’s daughters) go check on her,” Brandy McCubbin said. “Of course, Kenley, she takes her blankets down there and wants to sleep with her.”

When Lucky recently had a setback that took her off her feet for a few days, Brandy McCubbin took off early from Taylor County Elementary School, where she teaches, and spent extra time nursing the little calf. Lucky has balance issues because her double head is so heavy.

Two-faced births don’t happen only to cattle. Frank and Louie (also known as FrankenLouie) was what is called a diprosopus or craniofacial duplication, also known as being a “Janus cat” — a two-faced cat. Janus was a Greek god with two faces, because he was considered to look both to the future and the past.

Most Janus cats don’t survive for long. But Frank and Louie lived for 15 years. The Massachusetts cat behaved more like a dog than a cat, according to its owner, and walked on a leash and loved car rides.

Darrh Bullock, an extension professor in the department of animal and food sciences at the University of Kentucky, said that calves like Lucky are “extremely rare. It’s the first one I’ve witnessed.”

He said that Lucky’s two heads are not necessarily a genetic effect, but could have been caused by environmental influences such as hormonal imbalances or some sort of chemical that happened to get into the mother during the developmental stage of the fetus.

Fully splitting the embryo would wind up as identical twins.

Jonathan Beever, a professor of genetics, genomics and bioinformatics at the University of Illinois, recently worked on a project, primarily with Angus cattle, on “developmental duplications.” Such duplications appear to be an inherited recessive genetic condition.

Beever said a calf in Iowa was born with two heads and lived 16-18 months until it was sent to market.

“Even with that condition he was viable,” Beever said.

“There are 25,000 different genes that control how an animal develops,” Beever said. “When one of them gets disrupted, that allows things to happen that aren’t normally supposed to happen.”

Beever said that Lucky is probably not one of those mutations, “but it gives us insight that something happened during that developmental time period, probably day 18 to 25, during pregnancy. And the body decided to develop like that.”

Darrh said he sympathizes with the McCubbin family, which has dedicated itself to Lucky.

Because of the calf’s head weight and balance issues, “It’s going to be a hard life for the calf,” he said. “But once attachments are made … well, I have an animal-loving family, too.”