FRANKFORT, Ky. (Dec. 19, 2016) – Kentuckians from across the Commonwealth gathered at the State Capitol today to observe Kentucky’s eight Presidential Electors cast their ballots for President and Vice President of the United States.

“The meeting of the electors is a special opportunity to see our democracy in action,” said Secretary of State Alison Lundergan Grimes. “It’s wonderful to have so many people come together to witness our electors cast their votes on behalf of all Kentuckians.”

Pursuant to the United States Constitution, the President and Vice President are elected by the Electoral College, which is comprised of electors from each state. The number of electors allocated to each state is equal to the number of Senators and Representatives the state has in Congress.

Because Republicans Donald Trump and Mike Pence won Kentucky’s popular vote, Kentucky’s electors are those nominated by the Republican Party:

Throughout the United States, each state’s electors meet on the same day in their respective state capitals to cast their electoral votes. Kentucky is one of 21 states in which the electors are not required to vote for the candidate who won the popular vote. Nonetheless, Trump and Pence received all eight of Kentucky’s electors’ votes for President and Vice President, respectively.

The meeting was held in the Supreme Court’s chambers in the State Capitol in Frankfort. In addition to Grimes, Chief Justice John Minton administered the oath to electors and historian Ron Bryant gave a historical overview of the electoral college. The ceremony also featured performances of The Star-Spangled Banner and My Old Kentucky Home by students from Westridge Elementary in Frankfort and the Pledge of Allegiance from students from J. Graham Brown School in Louisville.

–Bradford Queen
Office of the Secretary of State 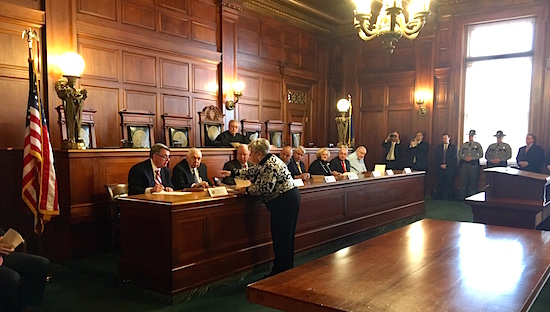