When Linda Robinson recently relocated from Fort Mitchell to Washington, DC, the only Christmas decorations that made the move with her were her collection of Jim Schmidt’s wood-carved Santas — all 30 of them.

“It’s not Christmas until those Santas are out on display,” says Robinson.

Like Robinson, many Northern Kentuckians regard a Jim Schmidt wood-carved Santa as a treasured fixture among their Christmas traditions.

Schmidt, a retired Covington firefighter who lives in Fort Mitchell, began carving his Santas close to thirty years ago after his wife Mary bought him a wood carving set one year for Christmas. At the time, he worked for the Covington Fire Department, but when a health issue put him out of work for six to eight weeks, he had to find something to do, he says.

Schmidt, a retired Covington firefighter who lives in Fort Mitchell, began carving his Santas close to thirty years ago after his wife Mary bought him a wood carving set one year for Christmas 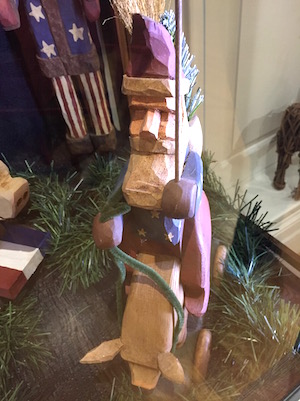 Inspired by a Santa ornament, he decided he’d take a shot at making his own Santas.

“So I ended up sitting at the kitchen table carving Santas, and then I thought, ‘what am I going to do with all these things now?’”

Someone suggested that the Beechwood Craft Show might be the place for them, so he took his Santas and sold every one of them before the craft show officially started.

The next year he began “fiddling around” with his own designs. He says he named his first one Adam and the rest soon followed.

“It turned into a love, I guess, and the people’s excitement when it would come time to sell them, well that kept me going and kind of fueled me to start the next year,” says Schmidt.

You won’t find your typical rosy-cheeked, rotund Santa in a jolly red suit among Schmidt’s collection. His Santas are uniquely sealed with gesso — a chalky glue, he says — painted with acrylic paints, and antiqued with his own creation of burnt umber and an oil stain.

During the Christmas holiday Schmidt says he would sketch designs and try to come up with new ideas. He poured through magazines and books, finding inspiration in different Christmas customs and traditions that he could tie in with his Santas. By January he would start carving, and he wouldn’t stop until June. 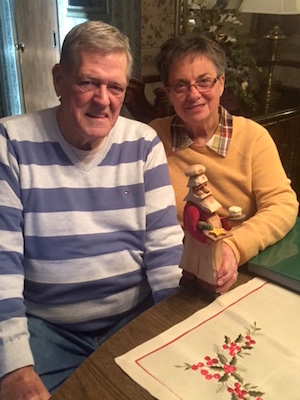 “I have no idea how many I’ve carved since I began,” says Schmidt.

He has since put aside his carving tools, he says.

“I don’t have the kind of ambition that I used to.”

He’s carved an occasional Santa for charitable efforts such as the one he carved for Volley for the Cure, for breast cancer, at the request of his daughter who coaches volley ball and teaches at Ludlow High School, and he says he created one for St. Elizabeth some time ago as well. He also did one for the Behringer-Crawford Museum.

While the museum might be featuring the largest collection of his Santas, it’s certainly not the only collection in town.

Robinson was working with the museum the first time they hosted a collection of Schmidt’s Santas and began a stockpiling for her own.

“Living in Fort Mitchell, I was of course familiar with Jim Schmidt because of the large crowds he drew at the Beechwood Craft Fair — not that I could ever get anywhere near his table,” says Robinson. “But it wasn’t until we did an exhibit of his collection at the Behringer-Crawford Museum, that the full scope of his work and his personal collection knocked my Christmas socks off.”

At that point, she bought one for her sister to kick off her collection, then she jumped in with both feet and began buying one for herself every year.

Tony Kidwell, of Villa Hills, a longtime friend who was a fellow Covington firefighter with Schmidt, began collecting the hand-carved Santas back in the 1980s.

“I have never met such a talented man,” says Kidwell. “I have around 60 carvings now. Jim is one of the best firefighters and persons I know, and I’m glad to call him a friend.”

Long before he was carving Santas out of white pine and spruce, Schmidt was known for the holiday scenes he would paint at the Old Company 8 firehouse.

So, he began painting whimsical scenes that always included the likeness of his daughter Jodi, who is now 40-years-old, and the family dog.

A firefighter by vocation, art was something Schmidt always enjoyed.

“When I was a kid, I’d sit there and draw when there was nothing else to do,” he says. “I’d get out an encyclopedia and start drawing pictures out of it. I normally have to have a reference to draw.”

Artistic talent was something he shared with his brother.

“My oldest brother was a professor of art at Xavier. He has pieces all over the world, I guess,” says Schmidt.

Bernard Schmidt, who was the chair of Xavier University’s department of art from 1990 to 1997, studied as a child with Aileen F. McCarthy in Covington, a student of artist Frank Duveneck. Locally, his bronze statues can be found on the campuses Thomas More College and Xavier University, and one of his ceremonial medallions is in a permanent collection in the Smithsonian Institution in Washington, D.C. Bernard passed away in 2013. 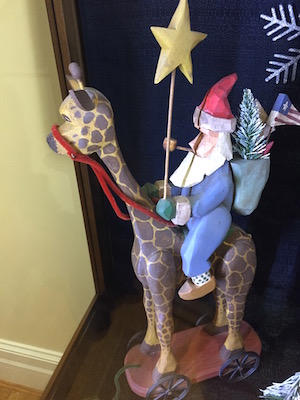 On display at the Behringer-Crawford Museum. (Photo by Jacob Clabes)
Schmidt may be retired from carving Santas, but his love for the figure is evident throughout his and Mary’s home. Towering, well-lit cases house hundreds — thousands — of Santas that date back through the ages and come from all over globe. A shelf of Ukranian and Russian Santas also features wiry versions of Krampus, of Germanic roots, who was said to deal with the naughty children. There is no shortage of festive whimsy in the Schmidt home.

As for a personal favorite among his own creations, it turns out it isn’t even a Santa.

“One of my favorites isn’t even a Santa, but “Old Man Winter,” he says.

Some of his designs, he says, were a little on the “ridiculous side.”

“Like the Santa on a giraffe. I only made a couple of them the first time, and the people, well, their compliments kept me going. It’s hard to explain,” says Schmidt.

And even though Schmidt has retired his carving tools, his Santas live on, bringing Christmas cheer to many, and the compliments will indeed continue.

Vicki Prichard is a reporter for NKyTribune.comq