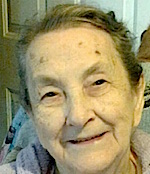 Mary M. Young Branham, 93, of Tomahawk, Kentucky passed away Thursday, December 15, 2016 at her home surrounded by her family.

Mary was born February 23, 1923 in Martin County Kentucky a daughter of the late William and Alice Bradley Young. Mary was a homemaker. In addition to her parents she was preceded in death by her husband, Bee Martin Branham; children, Owen Branham, Lucille Endicott, Brookie Mullett, Daniel Branham, and Bessie Branham;  siblings, Edmond Young, Clifford Young, George Young and Ethel Williams.

Visitation will be after 6:00 PM Friday,  all day Saturday at New Friendship United Baptist Church and one hour prior to service on Sunday at Young Funeral Home Chapel.

Online condolences may be left for the family at http://www.youngfuneralhomeinc.com/

NO INCREASE IN CITY GARBAGE COLLECTION RATE --YET