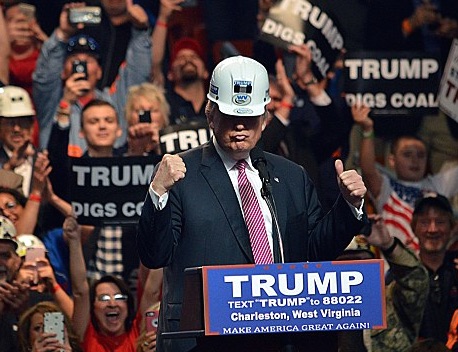 Even though President-elect Donald Trump has promised to revive the coal industry, his selections for three key cabinet positions all favor natural gas, the main cause of coal’s decline, Curtis Tate reports for McClatchy Newspapers. That could spell bad news for people in struggling coal communities, especially in Appalachia, where Trump won handily largely on the strength of his pro-coal stance. “Trump won handily in coal-producing regions that have been hardest-hit by the transition from coal to natural gas, especially those in Kentucky, West Virginia, Ohio and Pennsylvania,” Tate notes.

Trump has tabbed Oklahoma Attorney General Scott Pruitt to lead the Environmental Protection Agency, ExxonMobil CEO Rex Tillerson to be secretary of state and former Texas Gov. Rick Perry for energy secretary. Tate notes that all three oppose President Obama’s Clean Power Plan, “which would reduce carbon-dioxide emissions by a third by 2030, primarily by taking aim at coal-fired power plants. But all three men have been big promoters of the production of natural gas through hydraulic fracturing, and the resulting abundance of cheap natural gas has displaced a large volume of coal in the nation’s power sector.”

“Pruitt, one of the first state attorneys general to take the Obama administration to court over the Clean Power Plan, testified before a House of Representatives subcommittee earlier this year that natural gas had done more to cut carbon emissions than any federal regulation,” Tate notes. “Tillerson projected that global demand for natural gas would rise by 65 percent from 2010 to 2040, diminishing the importance of coal worldwide.”

“Perry, who was governor of Texas from 2001 to 2015, oversaw a massive shift from coal to natural gas that’s still occurring,” Tate writes. “In 2010, the two fossil fuels generated about an equal amount of the state’s electricity. By 2015, natural gas fueled 48 percent of Texas power, while coal had slipped to 28 percent, according to the Electricity Reliability Council of Texas.” (Read more)