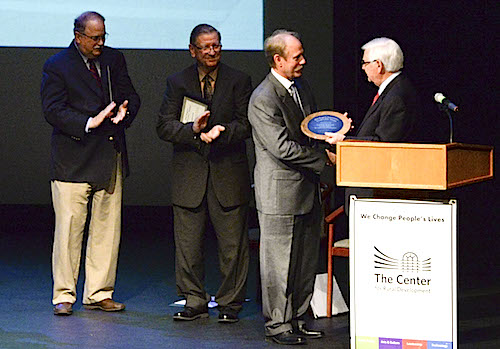 The Center for Rural Development, a nonprofit organization created through the vision of U.S. Congressman Harold “Hal” Rogers (KY-05) to be a state and national model for rural economic development, celebrated the past, present, and future at a special 20th Anniversary Celebration.

“I remember watching as bulldozers cleared this land and as the first bricks were laid over two decades ago,” Rogers recalled at the anniversary celebration. “As the building started to rise and take shape, it became a symbol of hope for a brighter future in Southern and Eastern Kentucky.”

More than 250 people—many of the original founding members and past and present board members—gathered on Monday, Dec. 12, at The Center in Somerset to celebrate the success of the last 20 years and look ahead to the future.

“Today, The Center remains on the forefront of innovation and leadership, spurring economic development, enhancing our technology infrastructure, opening new doors of opportunity for students, displaying our rich talent in the arts, and routinely bringing together experts to plan our work for the next 20 years,” Rogers said. “I’m incredibly proud of the success taking place right here at home to transform our region.’

The 20th Anniversary comes at an exciting time in the history of the nonprofit organization as construction of a 105-room Courtyard by Marriott hotel, located adjacent to The Center, is nearing completion and expected to open in mid-January.

“After many years of trying to get a hotel on the property, we are finally going to make that happen,” Lonnie Lawson, President and CEO of The Center, said. “Courtyard by Marriott will change the facility forever. It will allow us to attract small- to medium-sized conferences and conventions that we have not been in the market before now. It will truly change the region…and open up many tremendous possibilities.”

During the anniversary celebration, Rogers presented Lawson with the Hal Rogers Innovative Leadership Award for his work at The Center and service to Southern and Eastern Kentucky.

“Lonnie has never rested on his laurels,” Rogers said in presenting the award to Lawson. “When new projects and grant opportunities arise, he is the first one who says, ‘We can do that here.’ And that’s why The Center has such a wide-spreading umbrella—reaching from education to job creation to the arts, to rural and tribal police training, and safety.”

The Center, under Lawson’s leadership, is leading the efforts to bring high-speed, high-capacity broadband to Eastern Kentucky as part of the state’s broadband initiative, KentuckyWired. The statewide initiative will provide more than 3,000 miles of fiber optic cable throughout the entire state.

Two community leaders and long-time supporters of The Center were presented Hal Rogers Difference Maker Awards at the 20th Anniversary Celebration. Rogers recognized Dr. Joseph L. Fink III, professor of pharmacy law and policy at the University of Kentucky (UK) College of Pharmacy and the Kentucky Pharmacists Association professor of leadership, and Allen Anderson, head coach and CEO of South Kentucky RECC, for their service and support of The Center.

Fink served on The Center’s Board of Directors from 2003-2011 and as chairman of the Board of Directors and Executive Committee from 2008-10. He has contributed to the Doug Reece Memorial Fund to benefit Rogers Scholars every year since its inception in 2004 and has served as ambassador for The Center while serving on its board and is actively promoting The Center and supporting its mission.

Anderson, former member of The Center’s Advisory Board, and South KY RECC have hosted a golf tournament to benefit The Center’s Rogers Scholars and to date have raised $270,000 for the summer youth leadership program. Anderson and South KY RECC’s dedication to the Rogers Scholars program demonstrates his passion for the region’s youth while supporting Hal Rogers’ vision that “no young person should have to leave home to find his or her future.”

The Hal Rogers Difference Maker Awards are presented to individuals who are making a difference in the Fifth Congressional District.

At the conclusion of the event, guests were invited to take a guided tour of the Courtyard by Marriott hotel. The 105-room hotel will have a Bistro restaurant and lounge; indoor pool; fitness center; and a 24-hour market and business center.

Established in 1996 through the vision of U.S. Congressman Harold “Hal” Rogers, (KY-05), and other leaders, The Center for Rural Development is a nonprofit organization fueled by a mission to provide leadership that stimulates innovative and sustainable economic development solutions and a better way of life in Southern and Eastern Kentucky. In its 45-county primary service region, The Center provides innovative programs in leadership, public safety, technology, and arts and culture. The Center is committed to constantly expanding its capabilities in order to deliver a range of key services throughout Kentucky and the nation.