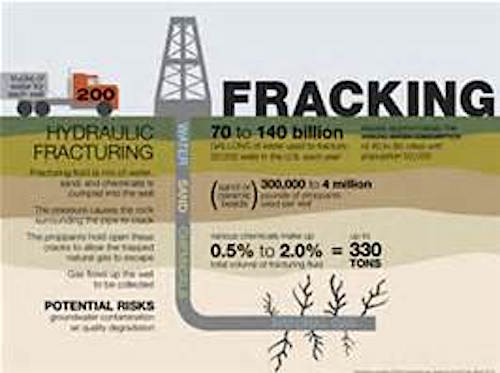 The Environmental Protection Agency on Tuesday released the Obama administration’s final report on the impacts of hydraulic fracturing on drinking water, eliminating a controversial phrase from a 2015 study that said researchers found no evidence of “widespread, systemic impacts” to drinking water supplies. An EPA panel in August said the report, which they called inconsistent, should be revised. Earlier this month Marketplace and American Public Media reported that the controversial phrase was added only after a meeting with White House officials.

Tuesday’s report replaced “widespread, systemic impacts” with “a far more guarded statement: ‘Hydraulic fracturing activities can impact drinking water resources … under some circumstances,'” Mike Soraghan reports for Energywire. The report left the industry “seething about political interference, while environmentalists were crowing that they had known it all along.”

“The announcement of the 2015 draft report had similarly cited ‘specific instances’ in which oil and gas activity had ‘impacted drinking water resources’,” Soraghan notes. “But the assertion was overshadowed by EPA’s apparent conclusion that drinking-water contamination wasn’t a problem. It’s not clear how much any of this matters now, with an incoming Republican administration and a GOP-controlled Congress. Both have made clear that they want less regulation of fossil-fuel production, not more.”

Thomas Burke, an EPA deputy assistant administrator and science adviser, said in a conference call, “There are instances when hyrdofracking has impacted drinking-water resources. That’s an important conclusion, an important consideration for moving forward,” Devin Henry reports for The Hill. “Burke added, however, that when it comes to a ‘national, systemic conclusion’ about the impacts of fracking, ‘That’s a different question that this study does not have adequate evidence to really make a conclusive, quantified statement.’”