Dawgs win three on the road, including big District win over Pike Central 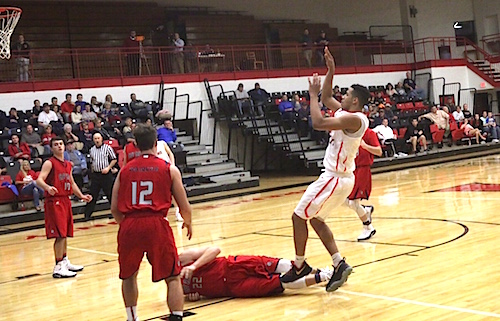 The Lawrence Co. Bulldogs have become road warriors lately after three straight road victories and several more to go before they play a home game. LCHS has a 7-2 record that most experts would not have predicted at this point in the season after losing so much talent from last year’s team.

Eastern, Ky. — on Saturday night the Dawgs traveled to Allen Central to play in the Johnny Martin Classic and put on a clinic in a 79-50 victory over the host Rebels. Starters didn’t play much in the second half as the clock was running the entire time because of the 35 point rule. Timmy Dalton led four Dawgs in double figures with 21 points, Trey Dotson and Tyler Maynard had 16 each, Jared Wellman tallied 12 points, Cameron Maynard, who missed several games with injury had 9 points, Chase Sartin had 3 points and Jordan Johnson chipped in with 2 points. The Dawgs hit 9 threes and went 8-12 from the line.

Vanceburg, Ky. — The Dawgs made the long trip to 16th Region opponent Lewis Co. and came away with a 84-67 win on Wednesday night. Timmy Dalton paced the Bulldogs with 39 points, Jared Wellman tallied 16 points, Trey Dotson scored 8 points, Alex Gilliam, Cameron Maynard and Tyler Maynard had 7 points each. The Dawgs hit 3 three pointers and went 12-17 from the line.

Lawrence Co. will play the rare doubleheader this Saturday in the Kentucky Bank Shootout at Rowan Co. in Morehead. LC will play Southwestern ( 6-0 ) out of Region 12 at 11:30 and then take on Madison Southern ( 2-3) out of Region 11 at 6:00.

” Boys are playing hard and figuring out what they need to do to win games. They are continuing to make progress and get better every day.”