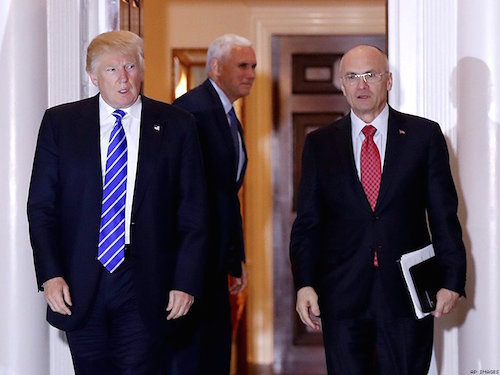 President-elect Donald Trump’s choice for labor secretary is a fast-food executive who “has argued for the need for low-skilled immigrant workers in his industry and others,” Philip Brasher reports for Agri-Pulse, a Washington, D.C., newsletter. Andy Puzder, 66, is CEO of CKE Restaurants, which operates the Hardee’s and Carl’s Jr. chains.

Craig Regelbrugge, former co-chairman of the Agriculture Coalition for Immigration Reform, said Puzder’s nomination was a good sign that industry will see fewer regulations and streamlined guest worker programs,” Brasher reports. “One issue that will give some in agriculture pause is that he supports the E-Verify system and says it has helped ensure that workers in his restaurants are legal. Growers have been fighting mandatory E-Verify bills in Congress, saying they won’t be able to hire enough legal workers until Congress acts on broader immigration reform. There are also differences in the restaurant industry over E-Verify.”

Puzder and Trump have not been on the same page when it comes to immigration. “He was a strong supporter of the Senate’s 2013 comprehensive immigration reform bill that would have offered illegal immigrants a path to citizenship and expanded access to low-skilled guest workers,” Brasher notes. “His one gripe about the bill was the amount of spending it would have devoted to border security, a central priority of the Trump campaign.”

Border security will not be in Pudzer’s portfolio at the Department of Labor, which “investigates violations of minimum wage, overtime and worker safety laws and regulations,” The New York Times notes. The paper quoted AFL-CIO President Rich Trumka as calling Puzder “a man whose business record is defined by fighting against working people.”

“Puzder has criticized the Affordable Care Act and argued against raising the federal minimum wage higher than $9 an hour,” The Wall Street Journal notes. The Washington Post notes that he also “opposes the recently-delayed Labor Department rule that aimed to make millions more workers eligible for overtime pay,” which the National Newspaper Association opposes.

ROTARY TO DONATE $1,000 TO STRUGGLING GATLINBURG