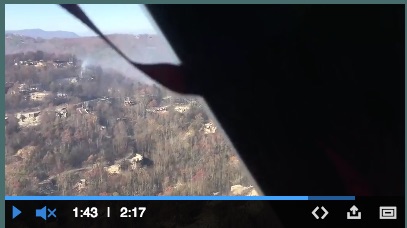 Tennessee officials have charged two teenagers with starting the fire that burned 17,000 acres in and near the Great Smoky Mountains National Park, killed 14 people, injured nearly 150 others and destroyed more than 1,700 structures.

The pair are in custody, charged with aggravated arson, and could be tried as adults, said Jimmy Dunn, the district attorney general. Dunn “refused to give any details about the case, including the teens’ ages or genders, except that ‘They are not from Sevier County … they are residents of Tennessee’,” Tyler Whetstone reports for the Knoxville News-Sentinel.

“Agents of the Tennessee Bureau of Investigation and of the U.S. Bureau of Alcohol, Tobacco, Firearms and Explosives have worked around the clock since last week on the case,” Whetstone writes. The National Park Service, which said all along that the fire appeared to have been “human-caused,” set up a tip line that helped break the case, said Steve Kloster, the park’s chief ranger.

“I want to thank everyone who responded to the National Park Service’s tip line. The public was critical in responding to that tip line and giving the investigators something to work with,” Kloster said.

The fire started near the Chimney Tops in the park and was swept into Gatlinburg by winds that sometimes exceeded 80 miles per hour after months of drought had turned the forest into a tinderbox. The city is allowing residents and property owners to re-enter permanently tomorrow and will be open to the public Friday.