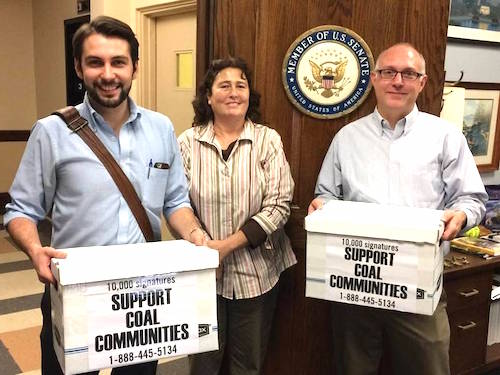 McConnell said he has “insisted” to House Speaker Paul Ryan that the end-of-year continuing resolution to keep the government open include a provision to extend 12,500 miners’ health benefits beyond Dec. 31, when they would otherwise expire. But such a move would be a temporary fix, and that doesn’t satisfy Democrats and the United Mine Workers of America, which opposed McConnell’s 2014 re-election.

Sen. Joe Manchin (D-W.Va.) threatened to hold up action on the resolution unless McConnell grants a floor vote to his bill to permanently guarantee pensions and retiree benefits for more than 100,000 coal workers and dependents, to be funded by fees coal companies pay to the Abandoned Mine Land Fund. “The Congressional Budget Office has said offsets, including Customs and Border Protection fees, would pay for the spending. But Sen. Mike Enzi (R-Wyo.) has called the pay-fors a ‘budget gimmick’,” Brown notes.

Another bill, by House Appropriations Chair Hal Rogers of Kentucky, would accelerate spending from the fund in areas that have been most hurt by the loss of coal jobs. The main roadblocks are “politicians from Wyoming who insist that their state should be able to keep building sports arenas, roads and other non-mine related projects” with money from the fund, which was created to clean up mine lands abandoned before federal strip-mine law took effect,” the Lexington Herald-Leader says in an editorial.

“McConnell spokesman Robert Steurer told the Herald-Leader there is no version of the bill in the Senate, but that his boss supports other funding streams for distressed coal communities,” Brown reports. “When asked whether the legislation might end up in the spending bill, Rogers said yesterday: “I’d like to see that, but it may or may not happen.”

Lady Dawgs off to a 3-1 start to the season